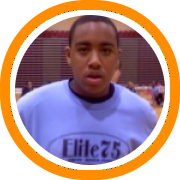 In the first of four recaps from this past weekend’s New England Junior Elite 75 Showcase we take a look at players who stood out from the blue teams.

Cody Ball
5’2”, Point Guard, 7th Grade, Londonberry Middle School
Ball is a seventh grade point guard who is quick off the dribble and not afraid finish in traffic among bigger players.  He drew high praise from his coach for his strong work ethic and competitive spirit.

Earnie Chatman
5’2”, Shooting Guard, 6th Grade, McKay Middle School
A well schooled and hard-nosed young player with a bright future, Earnie defended and shot the ball well – consistently squaring up to the rim and making shots off both the catch and the dribble.

Jesiah Wade
5’10”, Small forward, 8th Grade, Litchfield Middle School
Wade is small forward who is an above average athlete and dangerous in transition. He handles the ball well and finishes with both hands.

Sam Brown
5’8”, Shooting Guard, 8th Grade, North Attleboro Middle School
An aggressive and active defender, Brown hustles and isn’t afraid to get after loose balls. He does a good job staying between his man and the hoop off the ball.

Liam Bruno
5’11”, Power Forward, 8th Grade, Day Middle School
This lefty scored the ball in a variety of ways – making his fair share of shots, getting out in transition, and even showing some good post moves.  Defensively, he was strong as well.

Ashon Avent
5’10”, Small Forward, 7th Grade, St. Brigid
Avent, a seventh grader, is an athletic small forward who is a playmaker in transition and a solid on the ball defender.  He earned all-star status by way of his shooting and ball-handling.

Nick Baltayan
6’2”, Center, 8th Grade, Marshall Middle School
Baltayan moves well without the ball, does a good job getting open and receiving the ball in the low post, and is a solid rebounder at both ends of the floor.

Aaron Bekker
5’3”, Point Guard
A playmaking point guard who consistently attacks the basket, Bekker set his teammates up for some easy baskets and also made things happen on the defensive end of the floor.

Dominic Boyd
5’3”, Shooting Guard, 7th Grade, Higgins Middle School
Dominic does a nice job of running the floor and getting out in transition and is also a very good passer.  He works hard on the defensive end and applies solid ball pressure.

Austin Charles Patch
4’10”, Point Guard, 8th Grade, St. Mary Sacred School
Austin has a great understand of many of the intracacies that go into being a good player.  He plays hard, has a high I.Q., sets great screens, makes good cuts off the ball, and is very active defensively.

Chris Calnan
5’9”, Point Guard, 7th Grade, Galvin Middle School
Chris is a high energy combo guard who leaves it all on the floor and makes good passes to find open teammates.  He plays the game with great toughness and is consequently able to finish inside against bigger players.

Bonzie Colson
6’2”, Forward, 8th Grade, Global Learning Center
One of the most impressive players of the day, Colson showed his versatility by dominating the boards, leading the break, and scoring in a variety of ways.  He has great hands and feet on the block, a high I.Q. , and consistent shooting range from 15 feet and in.

Leo Connolly
5’9”, Shooting Guard, 8th Grade, John D Rumble
Connolly is a shooter who is virtually automatic from 15 feet and in with range that can extend all the way out to the three point line.  He displayed a quick release when shooting off the catch.

Matt Costello
6’0”, Forward/Guard, 8th Grade, Lynnfield Middle School
Costello is a versatile scorer with a well developed skill set.  He has great range to the three-point line and showed good ability taking the ball to the rim and finishing as well.

Patrick Benzan
5’9”, Point Guard, 8th Grade, Roxbury Latin
Benzan is a quick point guard who handles the ball well. He shows the ability to score himself as well as penetrate and kick out to shooters and is equally effective pushing the ball in transition or coming off a ball screen.

Andrew Cartwright
6’6”, Center, 8th Grade, PCMS
A well schooled big man who passes well out of the post, scores inside the paint, and dominates the boards at both ends, Cartwright also demonstrated an emerging perimeter skill set during skill stations.

Nicholas Capobianco
5’0”, Point Guard, 7th Grade, Londonberry Middle School
Capobianco was credited by his coach for being a solid defender and good rebounder while showing the toughness to be successful.  Our scouts liked the look of his jumper from the three-point line and in.

Matthew Catazione
5’1”, Point Guard, 6th Grade, St. Agnes Arlington
Catizone made good use of his strong ball-handling skills and crafty ball fakes to go by his defender all day long.  He is also capable of knocking down open jumpers from just about anywhere on the court.

Tarik “T.J” Darton
5’0”, Point Guard, 6th Grade, Longjo Middle School
Darton brings great energy to the court, communicates with his teammates well, and shoots the ball great from 18 feet and in and occasional range to the three-point line.

Alvaro Del Cerro
5’3”, Shooting Guard, 7th Grade, British School of Boston
Del Cerro was a defensive standout as he contained the ball beautifully and contested shots.  Offensively he did his best work in the mid-range area while also making himself a factor on the glass.

Carter Dillon
5’11”, Small Forward, 7th Grade, Bow Memorial Middle School
Carter showed a lot of energy, playing tough the whole day on both ends of the floor.  He has good range on his jump shot, is very good in the mid-range area, and can also defend the ball well.

Kyle DiFilippo
5’11”, Guard, 8th Grade, St. Mary’s of Lynn
Kyle is a point guard who is a great decision maker with the basketball.  He makes plays for his teammates, setting them up in positions to score, and also has great form on his own shot.

Brendan Enwright
5’11”, Power Forward, 8th Grade, Londonberry Middle School
Enwright did a good job all day of getting back in transition defense while battling on both the offensive and defensive glass.

KeAndre Fair
Point Guard, 6th Grade, Hartford, Connecticut
Fair is a quick point guard who is very crafty for such a young player.  He has a great attitude and makes good decisions with the ball making plays for himself and his teammates.

Freddy Diaz
6’3”, Small Forward, 8th Grade, Edwards Middle School
A long combo-forward, Diaz played through injury to block shots on the defensive end and score the ball in a variety of ways but most impressively in the mid-range area.

Chris DiClemente
5’11”, Power forward, 7th Grade, Narragansett Middle School
A promising young post player with great back to the basket moves, DiClemente is also a tenacious rebounder and can handle the ball well enough to go coast to coast.