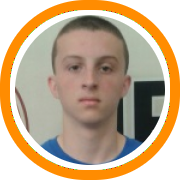 While the 8th graders were anxious to prove their worth at last weekend’s New England Junior Elite 75 Showcase, a wide variety of 6th and 7th graders were able to stand out as well.  Here is a look at the most impressive:

Corey Romich- Knock down three-point threat who attacks close-outs for clean, one-dribble pull-ups in either direction and projects as a big skilled forward down the road.

Azar Swain- Crafty, undersized guard with a creative handle and a soft floater he uses to score over size in the lane and jumper he can get off without much separation.

Chris Herren, Jr.- Pure perimeter shooter with a quick, feathery release, possesses the ball skills and quickness to be a handful off the bounce with added size and strength.

Nathaniel Green- Attacking lead guard with good quickness and extensive vision he uses to make plays in the open floor.

Wade Whipple- Heady playmaker with a knack for making positive plays off the dribble, solid perimeter shooter with a tenacious defensive approach.

Tarik Darton- Skilled, savvy guard with a pure stroke from three and solid ball skills, high basketball I.Q. and understanding of how to create and execute positive plays.

Brian Mareus- Handful on the low block with supreme size and length, rebounds and scores through traffic with a high motor and commitment to finish plays.

Ethan Telford- Legitimate threat from three, attacks off the bounce with a decisive first step and ability to absorb contact and finish over size.

Justin Leip- Lightning-quick point guard who impressed with several nice moves off the bounce, finishing with crafty floaters over shot-blockers in the lane.

Jack Lesure- A southpaw swingman who makes plays on both ends of the floor.  He has range to the arc, a high motor, and equally high basketball I.Q.

Tyler Dion- Small guard who caught fire from behind the arc. Pesky on the ball defender who picked up a ton of steals, then lead the break for scores.

Cross Meehan-Undersized guard who has a great motor, makes shots on the perimeter with a quick release, and is a growth spurt away from being very good.

Matthew Catizone-Skilled guard who passes it & makes plays for himself including a behind the back pull-up and reverse lay-up scoop off the baseline.

Matthew Craig- A smooth guard who can dribble, shoot, and pass, Craig got it going a little bit in his team’s first game, standing out as one of the top guards on the floor.

Matt Hanna- Heady young point guard with a basketball I.Q. beyond his years who knows how to distribute the ball and made excellent use of the bounce pass.

T’Mahri Mercer- Creative guard who plays with flair, Mercer is as shifty as he is quick to the rim and knows how to create space with his step-back.

Mike McCourt- A big guard who creates constant mismatch problems with his size and strength and has the perimeter game to match.

Will Johnson- Another guard who has the fundamental base in place one he hits a growth spurt with a nice release and quick crossover move.