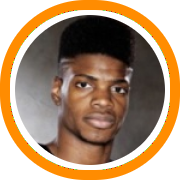 So much now rides on the month of July it’s almost not fair.

With the NCAA making it more difficult every year for college coaches to get efficient time to evaluate prospects, July is now the only time of the year when kids, who don’t go to a high profile high school or prep school, can hope to catch the attention of college coaches.  The consequence is that the kids burn themselves out playing practically every day this month.

But truth be told it’s no easy task for college coaches either, who have to make the most of every opportunity the NCAA allows them to evaluate talent.  Many coaches say good-bye to their families at the beginning of the month and then spend the next 20 days in the gym from the wee hours of the morning until late at night.

In the end, this month is both exhausting and crucial for players and coaches alike as players look to earn their scholarships and coaches try not to misevaluate potential recruits.

Below is a list of the region’s top 25 “stock boosters” in our estimation.  To be clear, we define boost as moving to a level not previously at.  In other words even though guys like Nate Lubick, Gerard Coleman, Nerlens Noel, Alex Murphy, Derrick Wilson, and Andre Drummond have all played tremendously well, it’s hard to get much higher when everyone already knows you’re a high-major lock.  Guys like Jordan Laguerre, Theodore Boyomo, and Keegan Hyland also fall into a similar category as their strong star to the summer has only solidified what they’d already done in the winter or spring seasons.

With all of that in mind, here’s a look at which prospects helped their stock the most in the first half of the live period.

Chris Fitzgerald – Not sure if he missed a shot in the last ten days and a fresh grown head of hair reminiscent of Larry Bird doesn’t hurt when coaches are trying to remember him either.  He’s got at least one offer in tow now along with significant Ivy interest.

Kaleb Tarczewski – He really stood out at Hoop Mountain Super Week II and picked up his first two offers with Fordham and Providence.  That’s likely only the tip of the iceberg as they just don’t make too many guys his size who can move the way he can.

Drexel University – Dartaye Ruffin is heading to New Hampton for a year of prep school but reportedly staying solid in his commitment to Drexel.  That will prove to be a big boost for Drexel’s 09-10 recruiting class as Ruffin looked like a high-major kid in Cincinnati and Springfield.

Freddie Wilson – High majors are out in full force to get a look at Drummond, but often come away with a second guy on their recruiting list as Wilson as shined at every stop and was followed for two days at Hoop Mountain by Rutgers head coach Fred Hill.

Billy Baron – He’s done a little bit of everything with the ball in his hands but more importantly he’s shown the toughness that all coaches look for.  He’s also not guaranteed to be playing for his father at URI in the future…stay tuned for more on this in the coming days.

Mike Carter-Williams – Offers from Providence and Florida State were reported following the trip south to the Big Shot Tournament and Nike Peach Jam.  Not hard to believe after the show Carter-Williams put on in the morning sessions of Elite 75.

Tyler Olander – An offer from UConn has quickly pushed Olander’s recruitment to the highest levels and with his reclassification to the class of 2011 and big performances at Reebok All-American and West Virginia things could just be getting started.

Melsahn Basabe – He was the talk of the Hoop Group Elite Camp this year, so much so that by the time he got to Elite 75 and was asked who offered, he couldn’t even remember all of the schools to extend scholarship offers.

Anthony Ireland – Even without Naadir Tharpe in the line-up the Playaz still went 3-1 and won their pool in Cincinnati and took the title at BasketBull’s First Eight.  The biggest reason may have been Ireland who has taken his game to new levels and has practically the entire A-10 taking note.

Ike Azotam – Metro Boston’s big has been as consistent as any big man in ’10.  All-Star at Hoop Group Elite and Elite 75 now has offers from Robert Morris, Hartford, Sacred Heart, and LIU with GW, St. Bonaventure, Drexel, Niagara, Fairfield, CCSU, Delaware, Howard, and James Madison all set to follow in Orlando.

Josh Turner – He couldn’t have done much better for himself at either the Super 16 Showcase or the Joe Brown Memorial as he scored the ball at will at both spots.  He has suitors in the Big East and Atlantic 10 and if his second half matches his first the list will only grow.

Steven Glowiak – He went from a D3 prospect to a D2 prospect in April and he might just have gone from D2 to D1 in July.  We’ve heard one comment from coaches over and over as they’ve watched Glowiak play, “wow he shoots the sh*t out of it!”

Tavon Allen – High majors have again taken notice (assuming he ends up in 2011) as Allen has played his best basketball of the AAU season, by far, in the last ten days.  He’s making shots, getting to the rim, and dunking consistently.

Andrew Shaw – When a team from Maine knocks off the New York Gauchos, college coaches take notice.  Shaw is the early winner as the skilled 6’6” forward picked up his first offer from Albany with others showing strong interest.

Dennis Clifford – Never better than against Carson Desrosiers at the Scott Hazelton Elite Camp, unfortunately most of the guys who saw it were high major head coaches there to see Desrosiers.  Nevertheless, it got a good buzz going among D1 coaches.

Zach Auguste – Not sure how man division I coaches knew his name a couple of weeks ago, now he appears to be the latest in a long line of skilled big forwards to come out of the Mass Rivals program.  Showed flashes of brilliance at Elite 75 too.

Eric Katenda – Not much set him apart from Drummond and Noel at Hoop Mountain and college coaches took notice as Katenda has many of the same tools with great length, athleticism, and agility for a player his size.

Xavier Pollard – With quickness that is off the charts he’s almost impossible to keep away from the paint, but he’s a better shooter than most realized and he proved it at Joe Brown by knocking down five threes in a game.

Alex Furness – We liked him in Springfield because of his size, length, and skill set at the 2guard spot.  When he proved he could run the point in West Virginia by handling against pressure and passing over the defense schools like Albany and UMKC became the first to get involved.

Shabazz Napier – Metro Boston star doing what he’s done all spring and that’s just about anything he wants with ball in his hands.  Providence, UMass, and URI are notable offers while Memphis, Alabama, Boston College, Rutgers, and St. John’s are on him as well.  Look for him to enter the “blowing up” list after Orlando.

Indiana Faithful – Coaches are intrigued because he’s a lefty with great size who doesn’t make many mistakes and has a terrific understanding for how to get his guys shots.  More often than not Keegan Hyland’s three-pointers are set up by Faithful’s playmaking skills.

Tyrus Weaver – The Windsor product is now running with the New York Panthers and was reportedly tremendous in leading them to the finals of the Summer Classic.  We got a look of our own the next day as he was just as good at the Super 16.

Imoh Silas – Expressions hasn’t lost a game yet this July and Silas has been a bit of a secret weapon for them.  He’s been phenomenal defensively blocking shots and dominating the glass, and emerging offensively with his ability to run the floor and finish.

Deshawn Murphy – He didn’t have much scholarship level interest before the AAU season began, but he’s carried his strong spring into the summer as he’s a junkyard dog type who will outwork you, but skilled enough to bury a handful of three-pointers a game.

Ryan Canty – New Hampshire became the first school to offer the Tilton bound big man as his ability to change the game inside the paint with his athleticism and toughness was immediately apparent at the Scott Hazelton Elite Camp.

Jerome Harris – Connecticut Select has had some very impressive wins so far this month and Harris’ finger prints have been all over them as he’s scored the ball in high volume and made plays on the defensive end as well.