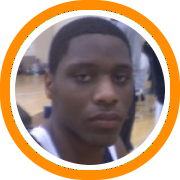 Adam Schrecengost,  Drive 4 Stardum:   Big bodied post who made the most of his touches on the first day.   Showed he had nice touch around the rim and utilized a soft hook a few times for his buckets.  Did well rebounding in his area as once he got in front of his opponent the ball was his.  Faced players more athletic than him, but did well when given touches.

Robert Alers, RI Hawks:  Played very well in the first game on Saturday as he used his quickness and instincts to get in the passing lanes.  Did his damage attacking the basket and in transition, but proved he could hit a mid range shot to keep people honest.   Played with energy and confidence, and would do well to improve his ball handling.   Got hurt early in the second game which ended his weekend.

Bryan Vachon, RI Hawks:   Undersized shooting guard who looks for his opportunities and uses a fairly quick release on a good looking shot.  Also is crafty with pump fakes and putting the ball on the deck to get some space for his shot.  His shot wasn’t falling the first day but he kept his mentality and fared better the second day.

Allen Harris, Metro Boston:  Played very well all weekend and showed his skill for getting to the rim or into his mid range game with some good ball-handling.   Also showed an improved stroke from 3 as he made the most of his opportunities.  He could have been even more assertive

Shabazz Napier, Metro Boston:  Really coming into his own as a complete player.  Was a positive vocal leader all weekend long and directed his team to some impressive wins before falling to a CBC team in the semi-finals of the gold bracket.   Napier is deadly from well beyond the 3 point line as he proved throughout the weekend.   Showed good quickness and body control on his drives as well.   Scored 47 points against CBA in a 74-73 OT game which was one of the best of the tourny.

Taquan Zimmerman, CT Kingz:  Strong physical combo guard showed nice vision and strength when attacking the hoop.  Knows how to use his body to counter his lack of quickness and can overpower his defenders to get to the hoop.   Showed good vision and ballhandling as well, though didn’t always make the best decisions with his passes.

Quenten Howard, Hartford Knights:  6’4 athletic post played very well all weekend.  Showed quick moves around the hoop and scored with a few post moves he finished nicely.   A surprisingly good athlete and he used that to his advantage while grabbing boards and going up strong for put-backs.  He is comfortable and instinctive with his back to the basket, and will use his strength while on defense as well.

Maxie Esho, Hartford Knights:   Has improved throughout the year and has shored up his ball-handling skills.   At his strongest while attacking the rim and he had some explosive finishes throughout the tournament.  Was an intimidator around the hoop on D as people looked to see where he was before going up for shots.  Still needs to gain strength and touch around the hoop to reach his full potential but is making strides.

Ellis Cooper, SECC All Stars:  Showed good leadership with his team and took over a few games when he needed to.  Very good in the mid range area and uses his athleticism to get there.  Will also work for boards and look for contact when going back up with the ball.

Darius Watson, CT Bulldogs:  Showed a few nice skills in his games over the weekend.  Has a good touch from the perimeter and is willing to rise up and take his shot if given a little bit of space.  He is also smart enough to use his body against smaller defenders in the post and utilizes turn-arounds to his benefit.  Can get to the hoop as his ball-handling is good enough and will finish through his defenders.

Ryan Kolb, CT Bulldogs:  Opened a few eyes this weekend as he showed a good face up game and the ability to make shots at a consistent rate.  Will scrap for boards and get his hands on balls down in the post, though he’s more comfortable facing the hoop.

Jalid Vazquez, CT Kingz:  A point guard who uses his speed to his advantage.  Not the most physically well developed kid, and struggles with contact but is solid with the ball.  Proved that he wasn’t afraid to attack the hoop and challenge defenders in transition.  Scored 17 points in the first half against the Long Island Lightning,  and did all he could to get his teammates involved as well in a last second loss in a Gold Bracket play-in gamer.  Showed good scoring ability in mid-range, though he struggled with his shot off the dribble.

Danny Lawhorn, Connecticut Select:  One of the quickest guards with the ball and throws great outlet passes that always hit his teammates in stride.  Lawhorn challenges his defenders as well as his teammates and doesn’t let his size hinder his game.  Sees the court extremely well and makes the right decision the majority of the time.

Jefferson Lora, CBC:  Lora was a monster on the boards all weekend and played physical against everyone he matched up with.  Bruising big body in the post who does his damage off hard work and positioning.

Kehm Birch, Xpressions:  One of the more promising young athletes at the event.  Proved very disruptive on the defensive end as he was active and challenged players more physical than him and didn’t give up anything easy.   Quick off the ground and plays with good instincts though he’ll chase block shots at his own will.   Rough offensively but goes after put-backs and boards when he has the chance to.

Alex Murphy, Xpressions:  Played very intelligently all weekend and stayed within himself.  A threat from deep and works hard defensively.   Knows how to play the game and will be vocal with his teammates as well.

Keegan Hyland, MBR:  Was one of the most consistent scorers of the entire tournament.  Given any room he was knocking down most everything he took.  Put the ball on the floor a few times and got into the mid-range area to mix up his defenders.   Showed he was capable of scoring against anyone game in and game out.  Played his games with intelligence and craft that was impressive to those that were paying attention.

Anthony Ireland, Playaz:  Was solid with the ball and got his teammates the ball in the right places.  Hard PG to pressure as he doesn’t get bothered and maintains his composure.  Can get to the hoop while relying on his ball skills more than quickness.  Hard nosed leader of a team, which is his best assett.

Luke Matarazzo, CBC:  Played the game with intelligence and hustle.  Deceptive quickness opened up space to get his teammates the ball in the post.  Also showed off his quick release from the perimeter and mid-range.  Did a good job leading his team past a tough Metro Boston squad in the Semi’s of the Gold Bracket.

Denzel Jones, CBC:  23 points in the semi-finals completed superb all-around weekend.  Bouncy forward with extremely high motor was effective on both ends of the floor.  Finishes and blocks shots against anyone and everyone.

Jerome Parkins, CBA:  Was a junkyard dog in the post all weekend.  Proved difficult to stop on the boards and made his living on putbacks and getting to the FT line.   Uses his athleticism nicely and carves out space with his body.  Showed that he wasn’t afraid of contact and his toughness was evident in all his games.