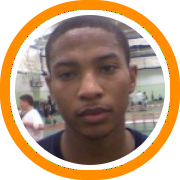 The New England Playaz have been on a roll to start the spring season, claiming victory in the Spring Fling Tournament and going to the finals at D.C. Assault’s Take Your Best Shot.  But early in the day on Sunday it looked as if their run might be coming to an end when ankle injuries to Naadir Tharpe and Austin Carroll left the team with 6 healthy players to get through bracket play.  But as is typical with good teams, other guys stepped up to get the job done as the Playaz went on to claim their second title in three tournaments so far this season by knocking off MBR in the quarters, CBC’s u16 team (playing up) in the semi’s, and CBC’s u17 team in the final.

Nate Lubick was the best player on the floor on Sunday.  He has a lethal combination of toughness and basketball intellect that allows him to impact the game in so many different ways.  Whether it’s overpowering people on the low block, making touch passes in transition, or controlling the backboard, he just does so many different things to help his team win.  Anthony Ireland also stepped up for the Playaz as he anchored the team from the point guard position in Tharpe’s absence, showing good composure along with an ability to get into the lane and make plays for himself when the situation warranted it.  Denzel Brito got progressively better as the tournament went on and ended up playing a big role down the stretch of bracket play.  Alex Francis was consistently good throughout the weekend as he plays with reckless abandon inside the paint and is a huge weapon in transition.  Overall, perhaps the best word to describe this group is tough, as they outworked, out-muscled, and out-willed the competition all weekend long.

Despite falling in the final, CBC’s u17 team also had a great weekend.  Jefferson Lora impressed not just with his ability to score and rebound inside, but also with some tremendous passing skills from the low post.  Often times the beneficiary of those passes was Denzel Jones who made a living diving to the rim and finishing.  The backcourt duo of Chris Evans and Luke Matarazzo was especially impressive on Sunday.  Evans is simply so much stronger than most opposing guards and so he is able to get to the rim and finish against lots of contact.  Matarazzo made a statement on the defensive end in both the semi’s and the finals as he picked up two of New England’s best point guards (Corey Wright & Ireland) full court and gave them both problems, while simultaneously showing an ability to break his man down off the dribble.  Steven Glowiak also provided a boost in the semi’s as he made a number of big shots down the stretch, both behind the three-point line as well as attacking close-outs.

The other two finalists in the u17 division also had multiple guys impress.  Andre Drummond showed glimpses of his oozing talent for CBC’s u16 team while Tavon Allen was a steady contributor all weekend long, shooting it well from 3 and making plays defensively.  Fred Wilson was terrific on Saturday as he showed how much he has matured in the last year by sacrificing his own offense and making those around him better from the point guard position.  Sunday was a bit of a coming out part for Xavier Rathan-Mayes.  While the freshman still has a lot to learn about being a true point guard and making those around him better, his individual skills are undeniable as he showed throughout the weekend, including a game winning one-on-one drive in the quarterfinals.

Billy Baron was extremely impressive when we watched Xpressions on Saturday as the Rhode Island player of the year has a college ready body, a quick released three-ball, and the ability to play either guard position.  Tyler Olander showed flashes of an emerging low post game on Sunday as we saw a couple of nice moves on the block, in addition to his always lethal perimeter game.

The Long Island Lightning took the chip in the u16 division as they scored a victory over the Connecticut Basketball Club’s other u16 team.  Jakarri McCallop, Jerome Harris, and Tyrus Weaver led the way for CBC as they made a great run through the tournament.  McCallop continued to produce in the paint while also showing glimpses of his evolving perimeter game with some mid-range pull-ups and strong drives.  Harris simply has a gear beyond most as his first step and ability to accelerate allows him to create offense at virtually anytime.  Weaver adjusted nicely to playing the point guard position as he made several nice passes while still showing his scoring ability.

Xpressions Elite took home the u15 title as they got big contributions from Evan Cummins inside.  Also stepping up was Jake Fay who showed a nice three-point stroke, Josh Downes with a well rounded and versatile game, Eli Lubick with his high basketball I.Q., and Johnnie Vassar with his playmaking skills.

Keegan Hyland, Dominic Borrelli, & Jacob Moore (MBR) – Hyland was lights out in the quarter-finals, making 9 three-pointers and going for 30 points as MBR gave the Playaz all they could handle.  Borrelli and Moore are both outstanding role players.  Borrelli is a terrific rebounder who can step out and shoot the 3 consistently.  Moore has got a great stroke of his own, and is also a versatile guy who plays within himself and lets the game come to him.

Jordan Lewis & Isaiah Salafia (CBC) – Both stood out at times for CBC’s other u17 team.  Lewis is a quick guard who knows how to get places with his dribble while Salafia is a terrific athlete who thrives defensively and in the open floor.

Shabazz Napier (Metro Boston) – We could watch him shoot jumpers all day long, but don’t sleep on his handle because you’ll likely get crossed

Lenzie Harrison (BC Eages) – Unsigned senior quick as can be on both ends of the court.  One of the best on-the-ball defenders you’ll find