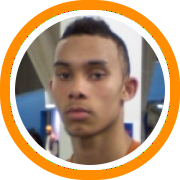 The best game of the day took place during the afternoon session, as a team comprised mostly of Expressions Elite AAU players matched up against a talented group of Canadian players. The game featured incredible athleticism, with several resounding blocks and acrobatic finishes. No one fit in better in such a game than Michael LaPlante, who brought tremendous energy, especially on the defensive end. He also showed yet again that he is more than capable of finishing high above the rim. Additionally, Luke Apfeld impressed for the second day in a row with his motor and intensity. He simply never takes a play off. The most impressive player in the contest, however, may have been Laurent Rivard. Rivard is from Canada but plays with the Expressions Elite team. He attacked the rim very well on Tuesday and has one of the purest strokes you will find. At 6’4, Rivard also has great size for a 2 guard. The entertaining game went down to the wire thanks to a spirited comeback by the Expressions squad. The charge was spearheaded by the effort of Ben Crenca, who played extremely hard, blocked shots, and finished tough in the lane. Thanks to a late lay-up, however, the Canadian team was able to emerge victorious in the tough battle of two of the camp’s premiere teams.

Gerard Coleman- It’s no surprise, but Coleman is flat out the most talented player at camp. He scores the ball effortlessly and has exhibited an improved three point stroke. The high-major prospect makes the game look easy.

Anthony Ireland- The small guard continued to impress on Tuesday, showing his ability to make big shots on the perimeter. Despite his small frame, he gets great elevation on his jumper. Ireland is an extremely polished guard prospect.

Rod Odom- Odom was solid again, handling the ball and running his team. At 6’7, he has a unique ability to handle and set up others, as well as score inside. Expect great things from this talented rising junior.

Alex Murphy- Murphy was deadly in his morning game. He scored on the block and demonstrated superior perimeter skills for a player his size. As we have said before, the sky is the limit for this kid.

Billy Marsden- The exciting guard played terrific in his afternoon game, showing off all facets of his repertoire. He finished very well with contact, made some excellent finds in the open floor, and knocked down shots coming off screens. There is no doubt about Marsden’s skill set; his size is the only question.

Evan Smotrycz- At 6’8, Smotrycz may have been the most skilled player at camp. He can put the ball on the floor, shoot it, and finish with either hand proficiently. Smotrycz is an intriguing prospect, especially if he can find a system that places a premium on skills rather than pure athleticism.

Alex Berthiaume- So good with the ball in his hands, Berthiaume has gotten into the teeth of the defense at will throughout camp. Prepping a year at MCI will help him a great deal, as he waits for the right school to offer. With his handle and passing ability, Berthiaume would be an excellent pick up for an NE-10 school.

Greg Jacques- Playing with many of his AAU teammates, Jacques has run the show successfully. His quickness off the dribble is astounding. Apparently, we weren’t the only ones impressed because Jacques received a scholarship offer from the University of Vermont on Tuesday.

Others Who Have Impressed:

Tim McKinney- Solid all camp long, McKinney was particularly impressive in the morning. He is a kid who goes to the hoop strong and can fill it up. Don’t be surprised if he leaves camp with a few scholarship offers.

Jaymie Spears- Spears is a young point guard who makes things happen. He gets into the lane consistently and is able to either drop off a bounce pass to a big man or score with a floater. Only a rising sophomore, Spears is poised to be a tremendous high school point guard.

Kevin Polanco- A shifty slasher, Polanco changes speed well off the dribble and can slice to the rim. He has also demonstrated a superb pull up jump shot, where he can shake a defender and stop on a dime. Polanco has had a great camp, leaving many NESCAC coaches buzzing about him.

Ryan Dulaire- Activity and energy are what Delaire brings to the floor. He plays hard and bangs extremely well on the glass.

Hanell Velez- Velez may not have played his best this week, but his versatility is, nonetheless, impressive. At 6’4 he shot the ball well from the perimeter and proved he could score inside as well. A smooth player who can do a lot on the floor, Velez is fun to watch.

Effrin Ellison- Ellison is a point guard with a tight handle who is able to knock down shots, especially off the dribble. At times on Tuesday Ellison was prone to making questionable decisions, however his talent and skill set are undeniable.

Eric Alleyne- Alleyne played very efficiently in his afternoon game. Mistakes and turnovers were few and far between, as he consistently found his teammates under the basket for lay ups.

Danny OKeefe- O’Keefe has had a very solid camp. He has shot the ball well, scored in the lane, and demonstrated his trademark toughness.

Jordan Laguerre- Legure showed up late to camp, only to lead his team to a victory over the vaunted Expressions squad. He is an athletic guard with a phenomenal handle and tremendous ability to create. He turned a lot of heads with his performance in the night session.

Lavar Moore- A big, strong guard, Moore can shoot a little bit and is a defensive stopper. He is as physical a guard as there was at camp.

Nate Simpson- Simpson was a pleasure to watch on Tuesday because of his tireless work ethic on the court. On some possessions, Simpson grabbed multiple offensive rebounds, each time, kicking the ball out in order to restart the offense. An upper-echelon athlete and a tough-minded player, Simpson is an intriguing prospect.

Elvis Gale- Along with perhaps Luke Apfeld, Gale was the best leaper at camp. He is an unbelievable athlete who plays high above the rim.

Alan Harris- Smooth and always in control, Harris can really score in a variety of ways. His jumper was falling on Tuesday, and in the All-Star game, he showed that he can finish with authority.

Ryan Canty- A lot of people have been talking about the young 6’8 big man. Canty has a very good stroke and quick feet. Once Canty develops better hands around the basket, he will be a task to stop down low.

Phil Gensicki- This 6’6 lefty plays hard and can really shoot it from behind the arc. He also uses his body well in the post and employs solid footwork.