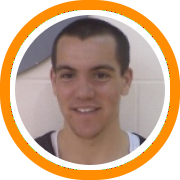 The Hoop Group held their annual Academic Elite session at Albright College in Pennsylvania. In order to qualify to participate in the camp, student-athletes must maintain at least a 3.2 GPA in the classroom, and at least an 1050 (Math/Reading Sections) on the SAT.

This session had a great deal of New England influence, as a number of players, and coaches from New England participated in the event. The Winchendon School's Mike Byrnes, served as the commissioner of the Ivy League, Wilbraham and Monson Academy's Chris Sparks was the commissioner of the Patriot League, St. Andrews School's Mike Hart ran the camp "sweat shops," and Suffield Academy's Jeff Depelteau was a coach in the Ivy League.

Salisbury School coach Jeff Ruskin even stopped by for a day to check out the talent, as well as check in on his rising senior 6'6" Mark Miller. Despite being a little undersized on the low block, Miller had a nice session for himself grabbing a number of rebounds in traffic, and even finished a few nice plays in the paint.

Here are some other New England products who shinned at the event:

Scott Watson - Watson has been all over the camp circut this summer, and at each camp he seems to improve a little more. He has easily added ten pounds of muscle to his frame, and has attended just about every help station at evey camp. This session he took the ball strong to the hoop, and shot the ball well from behind the arc. Look for him to have a breakout year for Coach Sparks at WMA if he keeps up his tireless work ethic.

Along with Watson, there were a number of incoming WMA players at the event, including Mitch Amelio, Chris Quinn, Mike Condon, Chris Williams, and KJ Baptiste.

Joe Bozzuto - The Winchendon School, incoming post-graduate, Bozzuto had a lot of heads turning, and many pens to paper throughout the session, as he got by defender, after defender. He was flat out dangerous in the open floor! He moved the ball very well, and setup many of his teammates for easy buckets. Bozzuto, along with the likes of Akeem Williams, and Joe Accoui should make it a nightmare for guards in Class A this season.

Jake Donnelly - Donnelly had a very good session for himself. The rising junior used his jab and quick first step to get by defenders all session. He finished in traffic well, at times hanging on to the ball to the last second before finishing on defenders. He was streaky shooting the ball, but his shooting stroke looks very nice.

Ben Ferris - Ferris, represented the state of Vermont well, along with his Vermont Basketball Group running mate Donnelly. Ferris did it all for his team this session. He scored going to the hoop, spotting up, and in transition. Ferris has some serious bounce to his game. He also shot the ball very well throughout the session.

Greg Miller - The 6'6" rising Westminster School senior made some nice plays throughout the session, and rebounded fairly well. Miller even showed that he can step out and knock down the three. He still has a lot of work to do in the weight room, but overall a nice showing for the big man.

Dan Martin - Martin showed his great stroke all session long. He seems to be getting more and more comfortable on the wing every time he gets out there. He took the ball to the basket well off the head fake from the wing, which raised some eye brows.

Matt Dean - The rising senior at Franklin High, had a good session, knocking down shots, hitting guys in transition, and playing strong defense.

Khyan Rayner - The rising Bishop Hendricken freshman was the epitome of what a point guard should be, in the session. He distributed the ball to teammates, played solid defense, and scored when needed.

Sam Rosichan - The rising Avon Old Farms sophomore had a great week for himself, doing the "little things," as well as scoring consistently in paint.