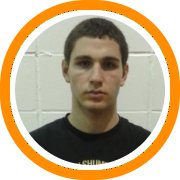 First it was Amadi Udenyi, then Marquis Moore, and now Gabe Levin.

Lucky number seven has the potential to be a very big commitment for the Pride as well.  A first team All-NEPSAC performer in Class AAA, Levin had a huge post-graduate season for the Chancellors, helping them earn the top seed in the post-season tournament and advance all the way to the NEPSAC finals.

He saw his recruitment grow to unprecedented heights as a result, scoring scholarship offers all the way up to the Atlantic 10 Conference.

Ultimately though, Levin opted to join Udenyi and Moore by putting his faith in Pride head coach Mo Cassara.

Levin will bring a versatile frontcourt player perhaps best knkown for his toughness but also filled with versatility.  Strong and athletic along the frontline, he understands ho to occupy deep post position to score on the block, has the shooting range to stretch opposing defenses out to the three-point line, and is also an excellent rebounder.

Levin's commitment is the latest recruiting win for Cassara and his staff as they have defied the odds at a late hour to build a class full of depth and talent alike.