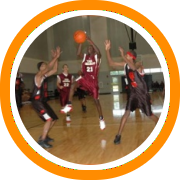 After a week-long break college coaches and hopeful prospects are back at it today as the live period officially resumes on July 22nd.

While the first half of the live period is typically characterized by more regional events, this second half is marked by more national level events, specifically in Orlando in Las Vegas.

Most AAU teams from around the country are headed to one of those two locations this week with two different tournaments being held in Las Vegas and Orlando being the host for the official AAU Super Showcases and National Championships over the next ten days.

Things in Orlando actually got started a few days earlier this week with the u15 Super Showcase tipping off on Tuesday.  CBC has already clinched a place in the gold bracket by going 3-0 through pool play while Expressions finished second in their pool after falling to the CP3 All-Stars.  BABC squares off with Hoops Elite Kentucky Gators this morning to decide the winner of their pool while reports of Wayne Selden going off for 41 points yesterday have already made news.

Action in the u16 Super Showcase begins today with a variety of local teams including CBC, CT Elite, Providence United, BABC, Boston Warriors, Metro Boston, and the RI Hawks all in action.

Following the conclusion of the Super Showcases both the u16 and u17 AAU National Champions will be crowned with the 16’s beginning on the 24th and lasting until the 30th and the 17’s kicking off on the 26 and lasting until the first of August.
Adidas is the only of the three major shoe companies to maintain their presence in Las Vegas and that makes this week’s Adidas Super 64 Tournament the cream of the crop.  The New England Playaz are the tournament’s second overall seed while New England is also represented by two Mass Rivals teams as well as the CT Knights.

Stay tuned to the New England Recruiting Report throughout the next ten days as we will bring you all the news and updates from Orlando, Las Vegas, and more.