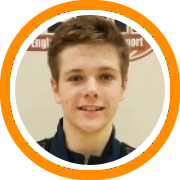 Drive Elite, a select team out of the Springfield area, won an exciting 16U division championship game over the Connecticut Basketball Club at the Hall of Fame on Sunday. They made their run to the final in impressive fashion, using a combination of strong inside play and consistent perimeter shooting. Jake Ross, a guard out of Northampton, hit the game winning shot with only a few seconds left on the clock in the final. He led Drive Elite in scoring with 12 points. CBC was led by guards Darrick Boyd and EJ Crawford, who scored 13 and 11 points respectively in a losing effort.

Joe Schneider (Drive Elite): Schneider, a center from Long Meadow, was a presence on both ends of the floor for Drive Elite. A legit 6-9, he moves very well for his height and looks to finish strong around the basket. Although he is limited offensively in the post, his 9 points in the final against a very athletic CBC team showed a great deal of potential.

Michael Lemke (Drive Elite): Lemke is a high motor, athletic forward also out of Long Meadow. He was tough attacking the offensive glass as he finishes everything around the basket.

Tyrique Jones (CBC): Power forward/center was a major presence on the defensive end in CBC’s run to the final. He is a high level athlete that really impacts the game blocking and altering shots. Although he is still raw offensively, it was nice to see him be more assertive on that end of the floor scoring 9 points in the championship game.

Arkel Ager-Lamar (CBC): Swingman out of Shaker Heights in Ohio was very impressive for CBC. His combination of outside shooting and strength attacking the basket was very tough for anyone in the 16U age division to stop.

KeAndre Fair (CBC): Point guard did an excellent job running a very balanced CBC team while mixing in his own individual. He is also a very good defender.

Jerome Desrosiers (Rhode Island Hawks): Desrosiers, a forward who will be attending Northfield Mt Hermon next year, was impressive for a Hawks team that went 2-0 on Saturday. He has a very well rounded game and scored in a variety of ways. He led the team with 15 points in an opening round blowout win over Expressions Elite.

Ian Sistare (Rhode Island Hawks): Scoring guard had 14 points in limited action versus Expressions. Although the team looks to him to score, he clearly values structure and almost always makes the extra pass on offense.

A.J. Brodeur (Rhode Island Hawks): Brodeur impressed with his tough play inside versus a very athletic Expressions team. He is also very confident shooting the ball from midrange.

Tyonne Malone (Expressions Elite): Really athletic slashing guard was the lone bright spot in the teams opening round loss. The southpaw looked to attack the basket from the outset.

Jordan Scurry (New England Playaz): Guard/forward did a nice job battling inside for an undermanned Playaz team this weekend. He has range on his jumpshot and is also a very good passer on offense.