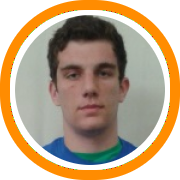 Greens Farms Academy senior forward Zach Baines has made a verbal commitment to Middlebury head coach Jeff Brown. His decision is pending acceptance of his application to the college.

Baines was widely pursued by dozens of top academic college and universities prior to making his decision. In fact, during a recent fall league game alone, Baines had eight different college coaches sitting courtside.

Baines has enjoyed a storied career at GFA, playing a major role in back-to-back NEPSAC Class C championships. As just a sophomore, he scored 18 points and pulled down 13 rebounds to secure MVP honors for the final game. He repeated that honor last year, finishing with 25 points and 10 rebounds to repeat as the finals MVP.

This season, he’ll lead a GFA club that also includes Jim Djema and Sunday Okeke, and should they return to the Class C finals he would have an opportunity to earn an unprecedented third straight finals MVP award.

If his performance this fall is any indication, Baines is poised for a big senior season. He averaged 25 points, 13 rebounds, and 5 blocks per game in the fall league action, and is one of only two returning players in Class C who earned First Team All NEPSAC honors a year ago.

This summer he was one of the standouts at the Hoop Mountain All-Academic Camp.

Despite Baines’ accomplishments to date, what makes the commitment such an important one for Middlebury is the fact that his best basketball is very likely still in front of him. A six-foot-five forward with a seven-foot-wingspan and the athleticism and motor to match, Baines’ skill set has continued to evolve in recent years while his frame is bound to blossom once he gets into a college weight program.

Below are some of his video highlights care of Crusader 22 Recruiting: