Gabriel’s First Offer a Big One 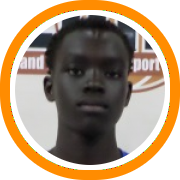 Bradford Christiand and D.C. Blue Devils rising junior Gob Gabriel has begun to make a name for himself this month, and in the last two weeks in particular.

He's the youngster on an otherwise veteran laden Blue Devils squad that has collectively played to rave reviews in July. They began the month by winning the BasketBull National Invitational, followed that up with a run to the finals of the Big Apple Showcase, and are finishing the month in Orlando at the AAU Super Showcase.

Up until this point, Gabriel has been known primarily as the little brother of Kentucky forward Wenyen Gabriel, but now he is emerging from big brother's shadow by experiencing the same type of rapid emergence that Wenyen did.

Gob is long, lean, and skilled for his size. He's also growing at a rapid rate and really hasn't even yet begun to fill out his frame. Last week in New York, he delivered perhaps the best individual highlight of the tournament.

This week in Orlando, he earned his first division I scholarship offer, and it was a big one as Rutgers University from the Big Ten Conference came calling.

The quick escalation in his recruitment may just be a sign of things to come as Gabriel is bound to add new offers from a variety of different levels in the coming weeks and months.