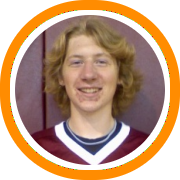 Two years ago very few people had heard the name Chris Fitzgerald, at least not in basketball circles outside of Swansea, Massachusetts.

At this time last year Chris Fitzgerald was widely considered to be a division II prospect.

His recruitment quickly escalated to the low-major level during last summer’s July live period and after continuing to prove himself during his senior season at Northfield Mount Hermon, Chris Fitzgerald is now heading to the Atlantic 10.

“Two years ago, a lot of people came to me and said ‘what are you doing taking this kid’,” NMH head coach John Carroll recalled, “but Chris came from nowhere and proved a lot of people wrong.”

With his decision to take his game to George Washington University and the Atlantic 10, Carroll acknowledges his graduating forward finds himself in a familiar situation.

“He is going to have some doubters with this call too but I have no doubt he will prove everyone wrong again,” Carroll said.  “This is a kid with a lot of determination.  He has really improved his game and his best basketball is still in front of him.”

A six-foot-eight face-up forward known for his ability to shoot the ball from behind the three-point line, Fitzgerald is ideally suited for trailing the break or playing in pick and pop action.

“Rick Pitino told me that Mike Marra was the best shooter he’s ever seen and Chris is right on par with that,” Carroll said.  “Chris won five games for us this year.  He had 25 points versus South Kent, 26 against Blair, and huge shots in three others…Plus he is an awesome kid.”

Quite a long way from the kid who left Swansea, Massachusetts two years ago.