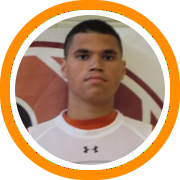 Six-foot-eight forward Tevin Falzon committed to Sacred Heart on Tuesday after having visited the school officially ten days ago.

For Falzon the commitment is the culmination of what had been a re-emergence of sorts over the last six months, as he worked himself into the best shape of his life and was consequently able to exert his inside-out skill set in a much more consistent and impactful manner this spring and summer.

Falzon continued to run with the Metro Boston AAU club this summer, and is the third member of this summer's squad to accept a division I offer in the last week after Jesse Chuku committed to Lehigh and Dimitry Coronel committed to Maine last week.

Falzon is currently enrolled at the Winchendon School for his post-graduate season, but prior to that he spent his high school career at Newton North, where he had a highly succesful four years under head coach Paul Connelly.

He has also had experience playing the international game, having represented the country of Malta, a small country off Italy's southern border, in the 2009 FIBA European Championships.

A skilled forward, who is both crafty inside the paint as well as capable with his jumper out to 20 feet, Falzon's best offensive asset may actually be his passing ability.  That type of versatility should allow him to make a solid impact along Sacred Heart's frontline for the next four years.