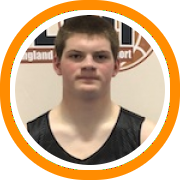 Dallas, Texas was the center of the grassroots world this weekend as Nike and Under Armour both held the first sessions of their respective circuits, the EYBL and UAA, surrounded by several other regional and independent events. Expressions Elite (EYBL), BABC (EYBL), and NE6 (UAA) all flew down to compete in these highly anticipated season opening events.

On the Nike side, Expressions Elite had a strong weekend posting a 3-1 overall record. They opened with a narrow 65-62 loss to CIA Bounce on Friday night but came back to win the next three over City Rocks, Rose City Rebels, and MEBO Team Hood. The backcourt of Noah Fernandes and Daniel Buie led the way throughout the weekend. Fernandes averaged a team high 15.2 points per game, including 21 against the City Rocks, along with 3.5 rebounds and 3 assists. Buie went for 21 of his own over Rose City and averaged over 12 per game on the weekend. Tre Mitchell and Joe Pridgen led the way on the glass, both with over 6 boards per game, while Preston Santos had a solid weekend as well, cracking double figures twice and stuffing all columns of the stat sheet.

Also in Division B, BABC finished 1-3 after dropping a pair of close games to UPlay Canada and Seattle Rotary, each by four points, on Friday night and Sunday morning respectively. Brycen Goodine averaged 18 points per game but shot only 35% from the floor while doing it. Mykel Derring was a bright spot, averaging just under 10 points per game while shooting 45% from the floor and 38% from three. The tandem of Mitch Doherty and Darion Jordan-Thomas led the way up front. Doherty averaged 9 points and nearly 6 rebounds per game while Jordan Thomas averaged 7 points and 6 rebounds per game. While they’ll undoubtedly be ready for session II next week in Indianapolis the schedule doesn’t do them any favors as they have Team Takeover (4-0), New York Rens (3-1), and Bradley Beal Elite (3-1) waiting for them.

Across town at the UAA’s first session, NE6 went 2-2 on the weekend with wins over Powerhouse Hoops and 1 Nation. Jaiden Delaire opened the weekend on fire, going for 29 points in Friday night’s win on 9-14 shooting from the floor and 3-5 shooting from behind the arc. Joey Reilly went 7-7 from behind the arc on Saturday morning, but Louisiana Elite made a three at the end of regulation to force OT and steal a win. Ryan Greer emerged as the weekend went on going for 21 points, 5 assists, and 6 rebounds in the win over 1 Nation. When Delaire went down with a pulled groin on Sunday morning, Greer stepped up again with 22 points and 8 rebounds while Chol Marial, who was still on a minutes restriction following his injury, had his best performance of the weekend with 15 points and a couple of big blocks and threes.

The 16u squad, fighting for one of just 12 spots in the UAA finals, went 3-1 on the weekend. Jaden Archer and Bennett Pitcher led a win over Florida Lightning with 15 and 13 points respectively while Corey McKeithan went for 17 points and 6 rebounds over Washington Supreme. Abou Ousmane had a double-double of 11 points and 10 rebounds in a Sunday win over D.C. Premier.

The EYBL and UAA will continue to run side-by-side next weekend as both circuits will be in Indianapolis for their second session.