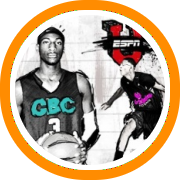 Andre Drummond continues to sit atop the class of 2012 as the top ranked prospect in the country but both ESPN’s national director of college basketball recruiting Paul Biancardi and senior basketball recruiting analyst Dave Telep make note that Drummond will need to challenge himself to be dominant on a consistent basis this summer.

Rising to the fourth spot in the country is Brewster Academy big man Mitch McGary who has “used the spring evaluation period to catapult up the rankings,” according to Biancardi.

St. Mark’s big man Kaleb Tarczewski has been equally impressive this spring to maintain his spot in the top ten prospects in the country while earning Biancardi’s praise as “the top true center prospect in the 2012 class.”

Landing just on the outside looking in at the top ten is Notre Dame Prep swingman Ricardo Ledo who is the leading scorer in the Nike EYBL through two sessions this spring.

Making the most dramatic rise is New London guard Kris Dunn who not only debuts in the top 100 but also cracks the first 50 in the 48th spot.  Also making their first appearance on the list are Hotchkiss big man Mike Tobey at 83, Bridgton guard Kareem Canty at 90, and Nikolas Stauskas in the 100th spot.

The Super 60 list of 2013 includes Nerlens Noel in the third spot as the Tilton big man has solidified himself as one of the premier post prospects in the country.

Kuran Iverson and Noah Vonleh both return to the list but with far less space located between them as Iverson falls to 12 while Vonleh rises up to 18.

Cracking the expanded list for the first time are Brewster Academy forward Deonte Bruton and Tilton forward Goodluck Okonoboh who debut at number 32 and 33 respectively.

The Terrific 25 of 2014 include two New England products in Tilton’s Wayne Selden who is the 7th ranked prospect in the country while St. Mark’s Kevin Zabo isn’t far behind at 20th.

To view the ESPN rankings in their entirety please click here.