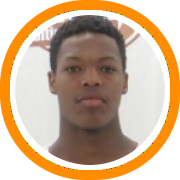 We continue our evaluation of this past Sunday’s showcase by examining the freshmen smalls (guards and wings) whose play differentiated them during the four-hour session:

Geo Baker – Already a very skilled ball handler and finisher considering his thin stature, Baker repeatedly used his quick crossover to free himself from his defender and either pass to open teammates or unleash his floater to finish over larger defenders. He also showed an ability to consistently connect on perimeter shots, a combination which made him one of the more electrifying guards from the 2017 class.

Austin Chadwick – The Chelmsford (MA) High product has shown noticeable growth over the past few months.  Chadwick plays with a quiet demeanor, but also displays consistent toughness and grit. His skill level has noticeably improved since the beginning of the AAU season, making him a young player to watch in the upcoming Merrimack Valley Conference campaign this winter.

Kingsley Cockburn – Cockburn was particularly productive shooting the ball. He had a few nice open court, midrange, pull-up jumpers in transition. Often a portion of players’ games that never gets properly developed due to a focus on outside shooting and driving to the rim, Cockburn is already well-ahead of his peers in this respect.

Jake Coleman – Coleman proved himself to be one of the more reliable outside shooters in his class. He started off hot in drills and continued this trend throughout the scrimmages.

Chad DiCenzo – The Pingree School freshman showed poise at the point. He is a true game manager, a player who can push the ball up the floor and find his teammates in transition, or slow the pace and execute the team’s half court offense.  The lefty also has a smooth jump shot with the capability of increasing his range with more repetitions.

Jakigh Dottin – On several occasions, Dottin exhibited nice spin moves which allowed his to get past his defender and to the basket, where he finished strong off of two feet.  A skilled offensive player, he remains a prospect to watch going forward.

D.J. Frechette – An undersized 5-foot-9 guard from Nashua (NH) South, Frechette was a commanding presence on the court. He also made sagging defenses pay by shooting the ball well from the perimeter.

Ethan Gabert-Doyon – The Brooks School freshman showed some encouraging glimpses on both the offensive and defensive ends. While his shot wasn’t falling, Gabert-Doyon consistently made the right pass to open teammates and also played tenacious defense. When asked about his new Brooks teammate, sophomore Ikenna Ndugba acknowledged that the Canadian has already impressed him.

Caleb Green – Green was one of the more vocal players in the morning session and displayed the same on-court demeanor during the afternoon scrimmages. He also showcased a dependable midrange shot to compliment his strong handle.

Shyheim Hicks – A highly talented playmaker who combines a strong body with rapidly developing perimeter game, Hicks has an uncommon economy of motion when in attack mode that makes him especially effective.

Jalyn Hinton – It’s not often one goes to a ninth grade showcase and comes away thinking about an NBA player, but Hinton did just that for many spectators. Pulling a Rajon Rondo-like behind-the-back pass fake, the BABC product shook his defender free in the lane for an uncontested layup. Though Hinton was overmatched physically at times, his long and athletic frame and on-court creativity more than compensated for any shortcomings, which will be alleviated once his growth spurt arrives.

Shamir Johnson – Whether connecting on a perimeter jumper from the corner or crashing the offensive/defensive boards, Johnson was a consistent force. He proved to be a challenging defensive matchup not only because of his length and speed, but also because he stayed in constant motion. As a result, he often outworked his opponents and was rewarded

K.J. Matte – A strong and talented guard who made his presence felt on both ends of the floor, Matte impressed with his dribbling and footwork in drills. He also used his strength and instincts to shut down his opponent on the defensive end.

Shaquille Murray – The latest in a long line of talented guard to come through the New Mission program, Murray will team with Alex Delarosa to form a potent backcourt tandem in the MIAA for years to come.

Averi Parker – Parker played well-beyond his diminutive stature. Whether snapping passes ahead to open teammates or instructing them on where they needed to be on the court, Parker showed a fiery competitiveness and strong basketball IQ. Besides connecting on outside shots, he also displayed fearlessness by penetrating into the lane. And though the results varied, Parker exemplified a basketball foundation which could very well make him a special player going forward.

Malik Pouncey – With perhaps the sweetest jump shot in the gym, Pouncey was a player opponents had to consistently account for in transition. His ability to connect either off the bounce or catch makes him a player capable of scoring points in bunches.

Keith Rado – The Canterbury freshman is versatile in the backcourt because he combines a strong body and highly competitive approach with versatile ball skills that allowed him to impact the game in a variety of different ways.

Alijah Rue – What he lacks in size at this point he makes up for with an instinctive feel for the game and understanding of how to play.  Bottom line – he’s a growth spurt away from being a player in the 2017 class.

Daniel Rymer – Rymer repeatedly found his way into the paint by using one-dribble drives from the 3-point arc and effectively utilizing his powerful first step.

Jared Simmons – A well-rounded basketball player, Simmons showed off an array of skills. He had a knack for always being around the ball, making the right pass and hitting some tough shots in traffic.

Azar Swain – One of three highly talented guards from the Rivers School, Swain caught fire at one point on Sunday morning, drilling shot after shot from long range while combining some crafty drives to the rim.

Cole Swider – A solid offensive player, Swider did a little bit of everything.  He made some deep 3-pointers in addition to acrobatically finishing off some nice drives into the paint.

Ryan Veguilla – The lefty point guard from Masconomet (MA) High was the on-court leader for his team during scrimmages. He also repeatedly found his open teammates for easy buckets.

Jordan Vidal – Arguably the most polished and poised point guard at the freshmen session, Vidal adeptly balanced his own offense with knowing when to involve his teammates. On one play, he crossed over his defender, spun into the lane and connected on a step-back jumper. Though Vidal seems to possess a score-first mentality, he also consistently made those around him better.

Calvin Whipple – The Leominster, MA resident was everywhere on Sunday. He connected on corner jumpers, hit a couple layups, crashed the boards on both ends and assisted on a number of baskets. While Whipple didn’t wow with his athleticism, he knew exactly where he needed to be on the court, thereby exhibiting a basketball IQ well-beyond his years.

Chris Wright – Paired with big man Patrick Harding, Wright was often the beneficiary of give-and-goes. Thought Wright was unable to consistently beat his defender off the dribble, he effectively used his teammates to free himself up for his offense.