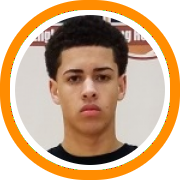 The best rising stars in New England were all in the gym on Saturday night at the Elite 75 Showcase – Frosh/Soph Edition. Here’s a look at some of the top prospects and major themes in the sophomore class:

They may still be underclassmen but some of New England’s 2018 products arrived with already big reputations on Saturday, and did nothing but back them up. A.J. Reeves was arguably the top freshmen at this event a year ago, and he made a case for being the top sophomore this year as well. Nate Laszewski was a step slower than normal coming off an injury but still showed the perimeter size and shooting stroke that has landed him early high-major buzz. Preston Santos’ upside remains especially high as well given his size, length, and budding skill set on the perimeter.

There were a handful of other guys who looked like they were out to make a statement Saturday night. Cole Swider, who has grown three inches since last year, looked like he couldn’t be stopped at one point as he and Reeves teamed up to absolutely dominate the court for a stretch. Philmon Gebrewhit, Jovan Jones, Cormac Ryan, Bryce Willis and Dana Tate also made statements. Gebrewhit showed some extra burst in the open floor along with his trademark pull-up game while Jones was especially explosive with length and body control alike around the rim. Ryan was already well known for his patented shooting stroke and feel for the game, but showed a new element here with increased quickness and playmaking ability. Willis came all the way up from New York and put New England on notice as a long, lefty playmaker with a bright future. Tate made a definite statement as well as he looked more athletic and fluid with some nice developing skill for a guy with his size and natural strength.

Laszewski and Swider are both representative of a major theme in New England’s 2018 class, a deep and talented bunch of perimeter forwards. Keigan Kerby, Tommy ONeil and John Kelly all fall into a similar category. While they can all stretch opposing defenses out to the arc with their shooting range, they each impressed with their own unique games as well. Kerby was productive both inside and out as he battled in the paint, rebounded and made a couple of effective post-moves. O’Neil is a lefty who was fluid putting the ball on the floor with either hand and able to make some plays against slower big guys. Kelly’s basketball I.Q. really stood out, especially in drill work, as his footwork and passing abilities were both polished far beyond his years.

Big in the Paint

One thing there doesn’t appear to be much of, at least quite yet, is a whole lot of true size inside the paint. The most notable exception though was Redemption Christian big man Joel Mensah, whose combination of size, length and athleticism made him a menace not just around both rims, but also rim running in transition. Chuck Hannah might not be bigger than 6-foot-6, but there weren’t too many people who could keep him from where he was trying to go inside the paint.

The little guard has a better chance to translate to the next level now then they did 10 years ago. It was a point of emphasis in the initial lecture of the day and a particularly relevant fact for a number of New England’s best up-and-coming playmakers. Tanahj Pettway continues to work his way back into shape and was able to get out and show his speed with the ball on a couple of occasions. It was his typical backcourt mate, Shandon Brown, who was particularly impressive though, both locking down on the defensive end as well as showing his burst off the bounce and ability to get into the lane on demand. Jonas Harper was another standout guard. He was able to get where he wanted off the dribble and a master of leveraging his strong body. Akeil Shakoor was another playmaker, but one who relied more on his wheels, while also demonstrating an improved jumper, to deliver a very strong performance. The typically tenacious Alex Rivera was opportunistic showing off his individual offense, including an improved jumper while Mike Palmieri used his quickness off the bounce to make plays for others. Shamir Johnson showed flashes of his ability to get where he wants off the dribble while Sebastijan Skoko used his shifty handle and strong body to create space off the bounce as well.

David Mitchell and Nyzair Rountree led a group of wing players that were physically ahead of their peers and consequently able to thrive. Mitchell is a southpaw driver with a ton of sheer power and force in his game while Rountree is an explosive athlete who plays high above the rim while incorporate his mid-range pull-up. Jonathan Cenescar, another power player on the perimeter, stood out with his terrific motor and hard-playing nature. Michael Perry was a scrappy southpaw that was physical inside and a great rebounder from the perimeter while Yanis Nyantenji was a high flying athlete who got up on the glass and Xahn Frater another athletic wing with some three-point range.

Sometimes the best way to standout in a showcase style environment is to “play the right way.” Paul Durkee is a classic example as a guy that can play on or off the ball, play pick n’roll, facilitate for those around him or score himself. Calvin Whipple too, has the type of game that is going to translate well to the next level as he’s already strong, shoots it very well, can play off screens, attack close-outs and even get up to finish with two-handed dunks. Defensively, there weren’t many better guards than Terrell Brown, who has also improved his ball skills. His Brooks backcourt mate, Brian Wright-Kinsey, wasn’t far behind with his active game, quick hands and versatile scoring tools. Zach Light was especially efficient offensively, showing both a skill set and a good feel for the game. Spencer Riley is a forward who receives praise for his ability to move without the basketball while Matthew Corey showed an unselfish floor game and high I.Q., along with an improved motor, and Nate Hobbs was running the floor and crafty finishing around the rim. Elliott Nelson and John Packard both looked the part of true point guards, an especially rare commodity these days, because they took care of the ball, distributed it and made excellent decisions. Jayden Depina was cut from a similar cloth but also showed off his ability to knock down threes.

Stay tuned to the New England Recruiting Report tomorrow as we'll examine the 2018 prospects that "broke-out" and played their way into the NERR database.