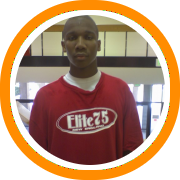 The second annual New England Elite 75 Showcase – Frosh/Soph Edition lived up to the expectations created by the inaugural 2008 event.

The hype going into the event surrounded the debut of two highly touted freshmen, Kuran Iverson and Goodluck Okonoboh.  Both players had well established reputations coming out of the middle school ranks.  Iverson had already attended UConn’s Elite Camp a month earlier and Okonoboh was known as much for his physical upside as he was for being Alex Oriakhi’s first cousin.

When the freshmen took the court in the morning session, both players lived up to their early reputations, standing out as the two clear cut talents in the field.  Iverson handled and passed the ball so well for his size that there was some hope that he could potentially evolve into a big point guard.  Okonoboh had similar size but a different approach, content to dominate the paint and show off his athleticism with a variety of explosive dunks and blocks.

Another highly talented freshman in attendance that day was Wayne Selden.  At the time, Selden was a six-foot-one forward who had already played two years at the high school level at O’Bryant.  Already carrying a powerful build, Selden would bully his peers to attack the basket.  Despite his dominance, few could have predicted that he would grow another four inches and expand his offensive arsenal to become one of the most dangerous scorers in the entire country.

One of the standout guards in the sophomore session that day was New London High School's Kris Dunn. While expectatoins were already high for Dunn coming off an all-state freshman season, the reality is that few could have predicted he would ultimately develop into one of the top lead guards in the country, a McDonald's All-American, one of the best college basketball players in the country at Providence, and an NBA lottery pick.

Georges Niang and Andrew Chrabascz, who both returned for the second consecutive year, were among the top performers in the frontcourt. Chrabascz' game was already characterized by the same blue collar approach that made him such a success at Butler. As for Niang, while his productivity was always undeniable, few would have believed he would have gone on to become an Iowa State legend or NBA player with the Utah Jazz.