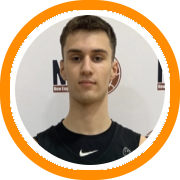 By the time it was all said and done we had seen an incredible amount of young talent come through the doors. The process of recapping all of that talent began this week and will undoubtedly extend into next week as the new regional format allowed us to better evaluate, and ultimately recognize, a wider crop of prospects.

After breaking down the big men and the forwards earlier this week, today we’ll focus on the wings where there are a handful of especially talented freshmen.

Taylor Bol Bowen, St. George’s - Absolutely loaded with upside, Bowen is a jumbo-wing in the making with terrific size at 6-foot-7 along with the full gamut of physical tools as he was athletic, smooth, fluid, and bouncy with a ton of playmaking potential.

Reid Ducharme, Nobles - Ducharme has positional size and athleticism but he also has a very high motor and already polished game. He scores from all three levels combining deep range with a solid handle and absolutely relentless approach from start to finish.

Mackenzie Mgbako, Gill St. Bernard - He made the trip from New Jersey and stood out from the very first station. Mgbako has a terrific frame with good size and long arms. He took smaller defenders into the mid-post, showed his handle in the open floor, was finishing way above the rim, and playing hard throughout.

Bryce Dortch, Dexter Southfield - Another jumbo playmaker, Dortch has good size on the wing at 6-foot-6 with the length to match. He’s got a handle, can create for both himself and others, and was even making plays defensively. He needs to work on his shot but the long-term upside is undeniable.

Edrick Quezada, Brimmer & May - A young freshman who just turned 14 years old but already has a strong body type, Quezada is a very talented prospect to monitor in the coming years as he combines his physical tools with good hands, dexterity, willingness to play through contact, and good instincts.

Kendric Davila-Diaz, Cathedral - He is a good sized wing with budding guard skills and at his best making plays defensively or getting downhill with the ball in the open floor. As he continues to get more assertive and develop his half-court skills, he could be a rising prospect in New England.

Jahmari Hamilton-Brown, Malden Catholic - Physically advanced with long arms and a strong frame, Hamilton-Brown also had the motor to maximize those tools as he was active defensively, blocking shots, overpowering people, and getting out to start the break with his own dribble.

Anthony Coke, Cathedral - One of the more experienced freshmen in attendance after playing up last spring and summer, Coke is absolute menace defensively as he combines his long and rangy frame with a high-motor. He creates offense from his defense and makes plays with the ball going north to south.

Caleb Middleton, Dover - Although Middleton is currently out with a broken arm, he was in attendance at Saturday’s Elite 75 and expects to be an immediate impact player in the NHIAA this upcoming season. At six-foot-seven, Middleton can play inside and out, and has a frame to keep growing

While some of the best long-term wing prospects were in the class of 2023, there was still a plethora of talent in the sophomore class, beginning with this group:

Massai Graham, Bishop Timon - A high-level athlete who traveled from upstate New York to make his mark, Graham made arguably the most memorable play in #E75 Frosh/Soph history when he shattered a backboard on Sunday morning with his incredible combination of power and explosiveness. The highlights were caught on numerous cameras and he was trending on social media by the end of the day, even appearing as one of SportsCenter’s top ten plays of the day.

Desmond Claude, St. Thomas More - He’s grown since last year and looks like he might not be done yet. Claude already has a good frame and an evolving skill-set with playmaking and shooting ability alike. In the modern game, he’s a valuable piece because he has budding size on the wing but legit guard skills.

Josh Morissette, Phillips Exeter - He’s strong, skilled, and smart with a division I offer already to his name. He also might have been the best shooter in the gym. He passed well, handled with both hands, and was, according to one coach, “the most dominant player on the court.”

Jaquan Sanders, Our Savior Lutheran - A long and athletic wing/guard who excels slashing to the rim but is also capable of shooting the three, Sanders is a big-time talent who lived up to his early reputation and reported recruitment in his first trip to New England.

Jarrel Okorougo, Brimmer & May - A wiry and athletic wing, Okorougo is an instinctive slasher with a lot of lift at the rim. With both his body and perimeter skill-set making steady strides, he’s bound to be a prospect who continues to ascend.

Darius Peterson, St. John’s Prep - He may not yet be as physically mature as some of the aforementioned sophomores but he has a good deal of potential in the coming years with a really long body type, athleticism to match, crafty floor game, and unselfish approach.

Jeremiah Paul, Hotchkiss - A strong-bodied wing who is at his best off the bounce, Paul is also an advanced finisher for his age with runners and crafty lay-ups alike. He has a D1 body type with evolving athleticism and some developing shooting range to match.

Miles Fiore, St. George’s - One of the better prospects from Rhode Island to come through the doors this weekend, Fiore is a shooter who can make threes in bunches, has a high basketball IQ, understands how to move without the ball, and also has good size and evolving athleticism.

Matt Curtis, Northwest Catholic - Curtis was one of the most productive freshmen in the CIAC last year and promises to be even better this year. Highly skilled, he’s probably best known for his prowess from behind the three-point line but was equally impressive with his mid-range game on Sunday.

Justin Covington, St. Luke’s - With a mature body and good perimeter size, Covington is very versatile at a young age. He was hitting open threes with great form, attacking the rim off the dribble, and even playing efficiently out of ball-screens.

Jayden Ndjigue, Bromfield - A high-energy wing who has been playing varsity basketball since his 8th grade year, Ndjigue has a lot of physical upside and shows increasing signs of being able to transition into a true guard in the coming years.

Michael Olivencia, Kolbe Cathedral - Another guy with a good combination of perimeter size and versatility, Olivencia has reportedly grown 3 inches in the last year and might even have some potential as a big point guard with the floor vision and high I.Q. he showed off on Sunday.

Will Kusnierz, Dexter Regional - A smooth and skilled wing from the state of Maine, Kusnierz shoots it well and has the type of game that, while still early in its development, will translate well to the next level if it keeps progressing in the same direction.

Quincy Ferguson, Capital Prep - Ferguson is a southpaw with a powerful body and a high-motor that started running with the very first drill. He can get downhill with his strong body but also has a nice shooting touch with range out to the arc.

Harrison Lien, Georgetown - Skilled lefty whose body has started to change in the last year. Shoots it with range and is crafty scoring in the mid-range area as well.

Tola Olorode, St. Paul’s - Strong and athletic with a high ceiling as his skill-set continues to catch up to his physical tools

Gus Holch, Manchester Essex - Good perimeter size and growing into his body. Has a feel for the game and versatile potential.

Sean Raymond, New London - Started to make a name for himself Sunday. High-energy and hard-worker. Just starting to grow into his body. Bright future.

Isaiah Riley, Hamden - Good size and strength on wing. Continuing to evolve athletically. Has a definite passing instinct that he should continue to nurture.

Matt Dobie, Notre Dame West Haven - Solid across the board with fundamentals and balanced floor game.

Eion Morrissey, Catholic Memorial - Rugged driver who wins 50/50 balls, drives hard, and has a tough/gritty style on both ends.

Will Chun, Brimmer & May - Relatively new to the game but already strong, Chun is bound to be a guy who makes a rapid jump in the next twelve months.

Nikai Brooks, Highville - Pretty long and athletic with ability to stop and pop in mid-range area and spin into baby hooks in mid-post. Also an active defender.

Andrew Mayock, GFA - Excelled in transition but was smart throughout. Had great vision, knew where to be defensively, and was shooting threat off catch and dribble.

Tyrese Garcia-Melo, St. Joe’s Prep - Young and versatile big guard with plenty of ability with the ball in his hands and long-term potential.