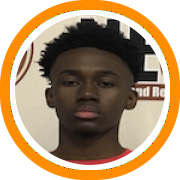 Our recaps from last weekend’s Elite 75 Frosh/Soph Showcase will begin in the frontcourt of the sophomore class.

To be clear, being a frontcourt player no longer means that you have to play exclusively inside, but it does mean you have the size to get things done in the paint on both ends when needed.

Here’s a look at the guys who fit that description who were most impressive on Saturday night:

Kareem Reid, Putnam Science – This New York native recently arrived at PSA and he has star written all over him. He has the body type, mobility, and athleticism to translate to the very highest levels but the southpaw can also face the basket to make plays and has some shooting touch to develop.

Richard Springs, MacDuffie – Another first year prep product, Springs is a true sophomore who not only has good size, a strong build, and a budding versatile skill set but also the exemplary motor and toughness that makes it all the more likely that he’ll realize his significant potential in the coming years. His toughness was as impressive as his natural gifts.

Matt Cross, Cushing – A physically mature and skilled mismatch forward who has both the size and strength to produce inside along with the skill set to stretch opposing defenses to the arc, Cross shot the ball well throughout the night and is beginning to play off the bounce as he continues to stretch his game with each passing year.

Trey Hall, East Catholic – There weren’t many more naturally talented guys in attendance as Hall combines elite size and natural skill. His approach to the game seems to be maturing as well as he was more willing to go inside than we’ve seen in the past and looked like a true mismatch scorer and three-range threat.

Jonathan Aku, Proctor Academy – The 6-foot-10 big man has broad shoulders and a great frame. He has the motor to maximize his big body as well and immediate value as a shot-blocker and rim protector. His offense remains raw but is making strides including a good spin move to the baseline.

Tarese Morse, Springfield Central – He was a major new name to emerge on Saturday. He’s ultra-long and loaded with upside. He’s fluid in the open floor, aggressive on the glass, and looked un-guardable at times with his patented spin move. He’s still very young and early in his development, but his tools were clear.

Bendji Pierre, Commonwealth Academy – A popular new name among the coaching staff, Pierre is a big body with a solid handle. He’s active with big hands and the ability to take the ball off the defensive glass to start the break. He also ran the floor well himself and finishes in stride on the break.

Tyrone Victor, Kimball Union – He’s a nice prospect because at 6-foot-8 he has broad shoulders, soft hands, and good touch around the basket. He’s only just beginning to fill out his frame, and maybe even still grow into his body, so he’s only in the infant stages of his development but has a bright future.

Graham Robinson, Concord Carlisle – Another developing 6-foot-8 big man with really nice touch to develop in the coming years, Robinson also showed good timing on the glass and blocking shots. He got his own offense on the second glass and will be even more productive as he learns to embrace contact.

Myles Foster, Brooks – What he may lack in height or explosive he more than compensates for with incredible length (a measured 7’3.5” wingspan) and a body to create space. He finished well inside and the fact that he’s left-handed only gives opposing defenders that much more difficulty.

James Kamich, Redemption Christian – Another RCA product that turned heads, Kamich is long and lean with good size at 6-foot-9. He played hard, ran the floor, finished well, and even impressed the coaches with his willingness to talk on defense.

John Adams, Wilbraham & Monson – This sophomore his continued to emerge and diversify his game over the course of the last year. In this setting he impressed with his motor as he changed ends, blocked out on the glass, converted around the hoop, and even blocked some shots.

Olu Oladitan, Brooks – He’s strong, athletic, and active in the paint. He was consistently on the glass, able to keep balls alive, and score second chance points. He was also a threat in transition and so he was constantly able to create his own scoring opportunities.

Shakiru Odunewu, Juanita Sanchez - He has a knack for scoring in a variety of different ways at this early stage as he has size to operate in the post, touch facing up from the perimeter, and the mobility to be a factor in transition.

Max Adelman, NMH – An unexpected standout of sorts, Adelman caught people’s attention with his energy and willingness to communicate defensively. He also showed a strong body, and a combination of size and I.Q. that could make him either a point forward type of potential big guard.

• Liam Murphy, Wilbraham & Monson – A multi-positional forward type of player, Murphy stood out with his versatility and jack-of-all-trades type approach
• Alton Lynch, Redemption Christian – A hybrid 4 type or maybe even a big wing in time, Lynch is an athletic and mobile live body who flies around the court and plays above the rim
• Khai Smith, Cambridge Rindge & Latin – He’s powerful and a physical presence inside the paint who can have a major impact when the game is played at his pace
• Max Mitchell, Greens Farms Academy – A skilled forward who showed a nice stroke off the catch and the dribble along with a sturdy frame
• Caleb Scott, Dracut – He’ll have good size for the MIAA and was able to score around the basket while showing a generally hard-working approach to the game
• Stephen Ward, Beaver Country Day – A versatile 4-man who has a high-motor, soft hands, and good I.Q, Ward had the size to produce inside but was also able to stretch the floor and put the ball on the deck
• Maximo Guillermo, Redemption Christian - At 6-foot-11, he has size and length to develop while also showing some good touch and the ability to pass out of the post