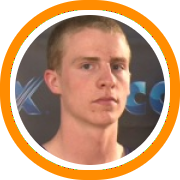 Northfield Mount Hermon guard Jackson Donahue confirmed to the New Engalnd Recruiting Report on Tuesday night that he had reclassified into the class of 2015.

Donahue spent the previous three seasons at Stonington High School where he scored over 1300 career points, while averaging over 26 points, 8 rebounds, and 6 assists per game last season.

His decision to reclassify back to 2015 should hardly come as a surprise, despite the steady stream of division I interest he was receiving in 2014.  One year transfers are highly unlikely in top academic prep schools like NMH, and essentially limited to only post-graduates.

“Reclassifying was always a very strong possibility,” Donahue said on Tuesday, noting that his older brother, Sam, did the same thing upon making a similar move from Stonington to NMH two years earlier.

Sam Donahue, who is currently a freshman at Boston College after graduating from NMH last spring, broke the school’s single season record for three-pointers made.

“I think when you look at some of the best three-point shooters at NMH over the years, they’ve really benefitted from having multiple years in the system,” he said.  “I know for Sam, his first year was pretty good, but there was a big difference between that and his second year.”

While Donahue should be ready to make an immediate impact for NMH this year, his move aligns him with an already highly talented junior class including local products like Josh Sharma, Aaron Falzon, and Collin McManus as well as returning point guard Daquon Ervin.