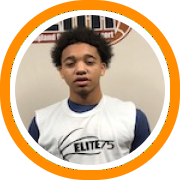 The 6-foot-4 swingman scored over 1600 points in his three years in the CIAC while averaging 27 points, 10 rebounds, and 6 assists per game in the 2018-19 season. He also led Bunnell to an SWC championship that year.

At OSL, he joined a line-up that featured current St. John's freshmen Posh Alexander and Dylan Wusu, along with Pitt freshman big man Max Amadasun. This year, he's taken on a more prominent role in the team's offense, despite the fact that the pandemic has limited OSL's games to date.

"The biggest thing to me was that they told me that I am a priority and not just a want," Edwards told 247's Travis Branham. "I know I have to live up to those expectations but I can go in there and make a big impact and can have a big role next year."

His commitment will make him the second Connecticut native on Kansas State's roster as he'll join East Catholic alum Mike McGuirl, who is currently a senior but will retain a year of eligibility.