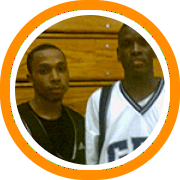 Game of the Weekend – CBC vs. Connecticut Select 17u
On Saturday afternoon CBC took on a young but talented Connecticut Select squad. While there were a variety of impressive performances on both sides Tyrone Gardner and David Gibbs were able to elevate their level of play and put on quite a show for the fans in attendance.

Gardner scored the game’s first six points as he converted with a runner on the first possession, pulled-up from behind the three-point line with a hand in his face the next time down the floor, and made the first of two free-throws after earning a trip to the charity stripe while attacking the rim soon after.

With Select jumping out to an early lead David Gibbs stepped up to lead a CBC run. The 6’4 guard was on fire from long range, made some incredibly quick crossover moves getting him to the rim, and finished high above the cup.

With both players maintaining their high levels of play throughout the 32 minutes of action, the game went back and forth. Simply put, neither player could be stopped as they both showed the ability to create their own shot and convert despite tough degrees of difficulty.

Also impressive during the game was T.J. McKiver from CT Select and Hillhouse High School as well as Zach Dugas from St. Luke’s and CBC. McKiver proved hard to stop with his back to the basket as he was able to capitalize on his size advantage under the basket while Dugas converted some tough three-pointers while also showing an ability to get to the rim and finish.

When it was all said and done CBC was able to hold on for a hard fought 92-87 victory although both teams played well in what was an extremely entertaining game.

17u Bracket – Finals TBA, Connecticut Phenom Elite vs. CBC
Coming into the weekend the 17 and under bracket held several contenders including CBC, CT Gold, CT Future Stars, CT Phenom Elite, and CT Select among others. At the end of the day Sunday a champion had still not been declared as CBC and CT Phenom Elite both survived to play another day.

CT Phenom Elite was forced to forfeit their first game placing them in the loser’s bracket early in the day on Saturday. CBC advanced through the winner’s bracket defeating CT Select, CT Future Stars, and CT Gold setting up a meeting between the two rival clubs to end the day on Sunday. In a game that came down to the wire CT Phenom Elite was able to hold on for a 2 point overtime victory giving each team one loss for the weekend. David Gibbs was again special for CBC while 6’8 junior forward Alan Chaney led the way for CT Phenom Elite. Chaney knocked down jumpers from the perimeter, posted up smaller defenders, and finished strong around the basket to lead his team to the victory.

With the victory CT Phenom Elite earns the right to face CBC again for a winner take all state championship game. The game is rumored to be scheduled for Tuesday night at Weaver High School although that is subject to change.

16u Bracket – CT Select, State Champions
Tyrone Gardner once again stole the show to lead his CT Select team to the 16 and under state championship. Gardner was able to score virtually at will although he also got a lot of help from the Windsor High School duo of 6’5 sophomore forward Adrian Satchell and 6’5 sophomore guard Steven Samuels who both stepped up throughout the weekend. Satchell was a terror on the glass and around the basket while Samuels was able to establish himself in the transition game using his tremendous speed from baseline to baseline.

Making the championship even more impressive for Select was the fact that they didn’t drop a game throughout the double elimination tournament as they finished a perfect 4-0 defeating two different Middletown Bulldogs teams before defeating CBC’s 16 and under team in back to back games. CBC was led by the strong play of Diego Ramirez and Chris Evans.

15u Bracket – Finals TBA, CT Flame vs. CBC
After a surprising defeat to a fellow CBC team on Saturday, Coach Gaetano’s team was able to fight their way through the loser’s bracket to force a championship game to be played on a later date. CBC won four games on Sunday including defeating the Flame in the final game of the day. 5’10 freshman point guard Phillip Gaetano did a nice job of running the show while Rashard Moore and Tae Jackson put up points in bunches.

Others Who Played Well
Steve Zazuri & Greg DeSantis – CT Future Stars
The backcourt duo did a nice job throughout the weekend. Zazuri is a rising senior from Masuk High School who has clearly spent a lot of time developing both his body and his game. DeSantis is an extremely skilled combo guard from Notre Dame High School of Fairfield who showed a sweet shooting stroke and some beautiful passes off the dribble.

Shane Gibson, B.J. Monteiro, & Greg Langston – CT Phenom Elite
Gibson showed more improvement since last year’s state tournament than perhaps any other player and now lists Sacred Heart and Siena as schools that have extended scholarship offers. Monteiro scored effortlessly throughout the majority of the weekend while Langston is a player who plays with maturity beyond his years with a sweet shooting stroke and an ability to get himself to the free-throw line.

Tony Taylor, Chris Prescott, & Nick Greenbacker – CBC
Taylor, Prescott, and Gibbs form a lethal backcourt. Taylor really stepped up in the win over the Future Stars while Prescott was at his best when he was creating easy shots for his teammates. Greenbacker isn’t flashy but he is crucial to this team’s success with his willingness to defend, rebound, and do the dirty work.

Greg Mangano & Brian Fitzpatrick – CT Gold
After Ryan Olander went down with a broken ankle late in the day on Saturday, CT Gold was looking for someone to step up. Mangano (6’11) and Fitzpatrick (6’8) both met the call to action. Both players are match-up nightmares for opposing defenses with their ability to play with their backs to the basket or shoot the ball from the three-point line.

Rashamell Vereen – CT North Stars
The cut up and athletic guard was impressive with his ability to attack off the dribble and get either all the way to the rim or pull up with good accuracy in the mid-range area. He was the catalyst behind the North Stars rise to the semi-finals of the winner’s bracket.

John Pinone & Jeff Pitkin – Glastonbury Hawks 16u
What does it say when a young high school team is able to advance to the semi-finals of the AAU state tournament? It says Glastonbury is going to be pretty good for the next couple of years. Although Pinone and Pitkin both stood out this group was successful because of their ability to play together as a cohesive unit.

Steven Glowiak – CBC 15u
The best shooter in the gym this weekend played in the 15 and under age group. Steven Glowiak was lights out from deep range throughout both days. With a quick and smooth release he swished more than he missed. He is already dangerous and could be deadly if he hits a growth spurt soon.