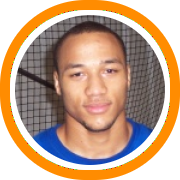 After several weeks of rumors it finally became official on Friday.  Charoy Bentley is headed to St. Joseph’s University to play for head coach Phil Martelli.  Bentley is said to have made his decision based upon the academic reputation of the school, Martelli’s history of developing guards, and a chance to play for one of the top programs in the Atlantic 10 Conference.

During the last four years Bentley has had as storied of a career as any player in the state of Connecticut while playing for his father, Charlie Bentley, at Harding High School.  The three year starter scored over 1600 points, including 26 per game as a senior, was a two time all-state performer, and the 2006 Connecticut Post player of the year.

His AAU career has been equally impressive as he starred for the Connecticut Young Gunz program for many years before playing with Connecticut Select during this year’s spring live period.  Last summer Charoy also participated in the prestigious ABCD camp.

At St. Joe’s he will join a team that is again expected to challenge for the conference crown next season as they return all five starters, including rising sophomore guards Jawan Carter and Darrin Govens.

“Charoy has got to go in there and work for his position,” his father told the Connecticut Post.  “There are a lot of talented players ahead of him.”

With the St. Joe’s offense again being based around talented post player Amhad Nivens, Charoy should be able to challenge for some immediate playing time with his ability to keep defenses honest thanks to his long range shooting prowess.

Charoy was also being recruited heavily by James Madison, Virginia Commonwealth, and Quinnipiac.