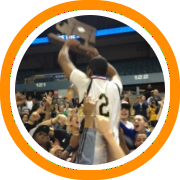 Nick McKenna scored 18 points including a three to beat the buzzer at the end of the first half as Danvers took home the MIAA division III state title.

Mahar Regional took the title in their first appearance in an MIAA championship game.  Jesse LaCroix led the way with a team high 16 points for the victors.

The MIAA’s biggest prize goes to the western part of the state for the first time since former UConn star Jeff Adrien played for Brookline.  Cornelius Tyson scored 16 points, all in the second half, to lead the run-away victory.

Junior center Vito Melo dominated the interior to the tune of 14 points and 13 reboundsa as Immaculate held off Capital Prep and their backcourt to capture the school’s first state championship since 1976.

Nolan Long, bound for URI to play baseball, dominated the basketball court for one last time, finishing with 21 points (including the 1000th) of his career along with 11 rebounds and 3 blocks.

Career got a big performance out of Treyvon Moore as they were able to hold off a major comeback attempt from Northwest Catholic and get over the hump after falling in the state finals a year ago.

St. Joe’s took their 11th state championship in head coach Vito Montelli’s 50th season at the helm of the program.  James Jennings led the champions, who took their second consecutive state title, with 26 points including 18 in the second half.