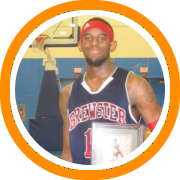 The National Prep Championships started with eight of the nation’s top programs on Tuesday morning and by 7:30p.m. on Wednesday we were down to just two.  Brewster Academy and Hargrave Military Academy were set to square off in what had to be considered the dream matchup when the brackets were released.  The game lived up to the hype and served as a fitting finish to an incredible two days of prep school basketball.

This was the 2nd game of the day for both teams which while commonplace on the summer AAU circuit is very unusual during the prep school season.  The energy level to start the game quickly erased any questions about whether the teams would any form of hangover from their morning games.  Ryan Taylor opened things up with a 3-pointer from the wing and Brewster quickly responded with 4 loud dunks to take an early 8-3 lead.  Seemingly everyone who entered the game made contributions for Brewster none more significant than uncommitted senior Jakarr Sampson.

Sampson finished off his MVP tournament with 22 points in the final on a series of rim rattling dunks. Hargrave’s front line had dominated in their first 2 victories and Sampson seemed determined to send a message from the opening tip.  The paint was going to belong to him in this game and he made sure everyone on the Hargrave roster was well aware of that.  Once Sampson established himself around the rim he also stepped out and knocked down midrange jumpers even tossing in a shot clock beating 3-pointer late in the game to seal the victory.  He was a very deserving MVP both based off his performance in the title game and throughout the week.

Mitch McGary saved his best game of the tournament for the championship finishing with 12 points and at least that many rebounds, likely more.  More than stats can show, McGary’s defensive impact changes the game for Brewster.  His post defense and thorough cleaning of the defensive backboard allow Brewster guards to leak out in transition and create easy scoring opportunities.

Aaron Thomas capped his high school career with another big game performance which has become the expected norm from the future Seminole.  Every time Hargrave made a run to threaten Brewster, Thomas seemed to find a way to make a play.  Whether creating a steal, burying a deep 3, or throwing down a monster one hand dunk in the lane, Aaron Thomas makes clutch plays for Brewster Academy.  He did all of those things in the 2nd half of this championship game and was a major reason Brewster ended up on the winning side.

Coming into the night undefeated, Hargrave wasn’t about to just lie down and let Brewster win the title because they came out with some energy.  Ryan Taylor capped a strong season with 20 points by scoring the ball inside and out.  Able to shoot with range beyond the 3 point line or bang with the strongest bodies Brewster had to offer in the lane, Taylor creates mismatch problems for any opponent.  A 2nd half ankle injury limited his effectiveness down the stretch or he likely would have approached 30 on the night.  He was joined in battle by Wake Forest bound point guard Codi Miller-McIntyre (10 points), Minnesota bound forward Charles Buggs (15 points) and uncommitted guard Ambrose Mosley (18 points.)

After a scoreless first half, Miller-McIntyre came out like a new man in the second stanza, attacking the rim and scoring with his soft floater over shot blockers in the lane.  He also showed deep 3 point range along with an ability to facilitate for teammates.  Miller-McIntyre isn’t often discussed with the top national point guards for 2012 but has earned the right to be a part of that group.  Charles Buggs played a prominent role for the first time this week as his number was called when other Hargrave big men got into foul trouble.  Buggs made the most of his opportunity in pick and pop situations by knocking down triples including a 4 point play.  He will need to add strength to withstand the rigors of the Big Ten next year but has a role as a stretch 4 man.

Ambrose Mosley continued his shooting explosion that started on the opening tip of the quarterfinal and didn’t stop until the final whistle of the title game.  The skinny 6’3” guard needs to be honored out to 25 feet and is just as likely to pull up off the dribble as he is coming of screens.  He made 6 long balls in the championship game helping keep his team close as Brewster threatened to pull away.

After winning their first national championship in 2010, this was the third straight year in which Brewster has advanced to at least the Final Four of the national tournament, and their win makes them the first post-graduate program in the country to win two National Prep Championships.