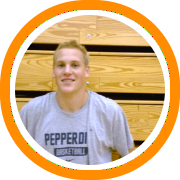 Wolfeboro New Hampshire is known for two things; summer tourism and prep school basketball. Since arriving at Brewster Academy 8 years ago Head Coach Jason Smith has done a tremendous job building a program that attracts top players from all around the country. But now perhaps the greatest prospect to come through the Smith Center doors is 6’7 junior forward and Nigerian native Emmanuel Negedu.

Emmanuel left his home and family just prior to his freshmen year to attend Brewster.
Now entering his third year at Brewster he may have escaped the challenges his homeland presented, but his thoughts still center on the rest of his family who remain there. The family has fallen on even tougher times than normal as of late as Emmanuel’s father has recently retired from the military but hasn’t received a pension check in three months, leaving them with virtually no income to provide for their basic needs.

Those close to Emmanuel say he has been, naturally, very upset by this turn of events, even feeling guilty that he has the opportunity to receive an education and play basketball while his family struggles.

Well if Emmanuel is upset he seems to be taking out his aggression on the basketball court. To say Emmanuel is physically gifted is a huge understatement. He is extremely long with a very powerful body and a 46 inch vertical leap. He is very effective with a jump hook on the low post and is terrific from the high post or short corner getting to the rim and dunking almost every time he touches the ball.

Emmanuel isn’t alone inside the lane as he and 6’10 senior Craig Brackins form one of the best 1-2 interior punches around. Brackins, who has already committed to Iowa St, is tremendously skilled for a player his size. While he could still stand to beef up physically he handles and shoots from the perimeter, runs the floor very well, blocks shots, and finishes high above the rim.

Andre McFarland is a 6’6 post-graduate who should see a good amount of time at both forward positions. He is strong as a bull and there is no stopping him from getting into the paint once he puts his head down and goes off the dribble. McFarland previously committed to USC but might be eyeing a prolonged future with Brackins at Iowa St. He is also being recruited by Idaho, Michigan, Indiana, and Nevada.

Iowa State is also in the mix for 6’3 post-graduate combo-guard P’Allen Stinnett, along with the likes of Idaho, Nebraska, and Kansas. Stinnett will most likely play the point for Brewster this year but may be at his best off the ball because of his ability to get into the lane and make things happen off the dribble.

Stinnett will be joined in the backcourt by either 6’2 senior guard Terrell McKenzie from New York or 6’5 post-graduate wing Tristan Thompson. McKenzie is a very quick and athletic guard who is being recruited by the likes of Providence, Wake Forst, Creighton, Miami, and Virginia Tech. Thompson is a player who knows how to play the game and get himself to the free-throw line incredibly well, and is being recruited by SMU, UTEP, and Wichita State.

The other members of the primary rotation should be 6’7 post-graduate forward Andre Walker and 6’3 post-graduate wing Matt Hornbuckle. Walker has been injured for most of the pre-season but is still being recruited by a host of mid-majors on up. Coach Smith says he is a very skilled player who will even play some point forward for the team. Hornbuckle is a California native whose recruiting has been dominated by low to mid majors from the west coast. He is deceptively athletic, very smooth and agile, and consequently gets to the rim very well off the bounce.

The team rounds out with two sophomores who are future division I prospects in 6’0 point guard Devan Bailey who also runs the point for the English u18 national team, and 6’6 forward Luke Apfeld who is still very raw offensively but plays very hard and has a good nose for the ball.