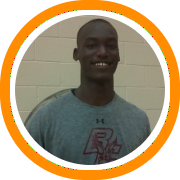 The third installment of the Boston College Elite Camp featured a talent laden crop of youngsters who spent the day learning the Eagles' offensive system and putting their skills to the test.  Here is a look at who stood out:

Jarred Reuter (Tabor Academy) – It is hard to believe that Reuter has four years of high school basketball left to play because he has such a mature game. He uses his sheer strength to score in the lane and nobody at the clinic could stop him from doing so. He also has excellent footwork and a soft touch, which makes him nearly impossible to cover in the post. Reuter also showed a nice outside touch, but he will need to quicken his release for that to be a consistent threat.

Djery Baptiste (Wilbraham & Monson) – Standing at a whopping 6’10” with a ridiculous 7’7” wingspan, Baptiste has an ideal basketball body. But wait, that is not all. He is only 15 years old. The Haiti-native will be a part of the class of 2015 at Wilbraham and Monson next year and could be one of the top prospects in New England for his grade. He is extremely athletic, running the floor even better than some guards at times. He can jump out of the gym. Baptiste is definitely raw and needs to work on his timing on the defensive end, but there’s no doubt that he could turn out to be a special player.

Steven Cook (New Trier HS) – Cook turned heads throughout the day with his bouncy play. While he certainly does not pass the look test, the 6’2” combo guard did it all. He attacked the rim, rose above defenders, and finished acrobatic dunks or lay-ups on countless occasions.   He also showed nice form from outside. Cook traveled all the way from Chicago to attend the clinic.

Kaleb Joseph (Cushing Academy) – Joseph looked like a man on a mission to impress and there is no doubt that he did. He was aggressive all day long, using his athleticism to take over games. He arguably had the dunk of the day when he came right down the lane and crammed down a dunk defender.

Andrew Chrabascz (Cushing Academy) – What was particularly impressive about Chrabascz was not his trademark post moves on this day. It was actually his quickness. He is not a pure wing player yet, but Chrabascz showed some good foot speed off of the dribble, blowing by defenders often and scoring around the basket.

Cane Broome (East Hartford HS) – Broome’s feel for the game separates him from his opponents. He always plays under control. One thing that was impressive about Broome was his use of his peripheral vision. He had a knack for finding open teammates that were barely in sightlines.

Michael Orris (Crete-Monic) – Orris, who de-committed from Creighton in June, stood out with his explosiveness. He has great fundamentals, but he had a knack for exploding to the basket and scoring on taller defenders.

Luke Worthington (Columbia Rock Bridge) – Whenever the ball went to the low post for Worthington, defenders would do anything to get out of the way. He is the definition of a banger.

Jacquil Taylor (Beaver Country Day) – Taylor showed improved explosiveness around the rim. He is starting to have a better feel for the low and mid post area, but definitely could afford to polish up a bit more. Defensively, he blocked plenty of shots, but could also afford to put his hands up when defending,

Nate Anderson (New Mission) – While many know Anderson as a big man, he showed off his point-forward skills today. When he is focused, Anderson can take over games with his good feel for the game.

Adrian Oliveira (Brimmer & May) – Oliveira is a master of the mental aspect of the game. He has the toughness and poise. He also does not get credit for having exceptional athleticism. He handled the ball well all day long.

Kahari Beaufort (East Hartford HS) – Beaufort can just score the ball. His outside shot was falling. He also played to win and did not just get his every time down.

Jeff Spellman (Beaver Country Day) – If there was an opportunity to shoot an opportunity, Spellman was knocking it down. He has also grown a little bit and matured. He has developed some moves and has deceptively good jumping ability.

Labson Abwoch (Homestead HS) – Surprisingly, few noticed this Maine-native’s impressive game. He is a 6’6” forward with good length and a soft touch inside. While he is wiry, Abwoch held his own defensively in the low post.