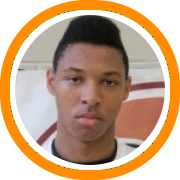 After a successful day one of the Boston Best 40 showcase, NERR was back for day two at the Rivers school to watch rising 8th 9th and 10th graders from the Boston area showcase their abilities and learn something from the coaches at the event.

In the morning, players were lectured by Phil Kasiecki, the managing editor at Hoopville.com, and Bo Ruggero, longtime high school basketball coach and the current head coach at Cohasset High School. Following the lectures, players participated in stations covering ball handling, attacking the rim, shooting, defense, and conditioning. After lunch, players were broken into four teams. Here is who stood out:

Victor is lanky combo guard with good bounce and quickness. He does a great job attacking the rim in transition, but can stop and pull from midrange. Off the catch, he has a quick lefty release and can shoot it out to 3 point range. Defensively he is long and active and gets a lot of steals and deflections. Udoji proved himself today as one of the top players at the event.

Miller was the biggest kid at the event, and showed a developing back to the basket and face up game. He knocked down jumpers in the 12-15 foot range and altered shots on the defensive end.

Shane is a heady off guard who has a high basketball IQ. He is a complete offensive player who can shoot it out the three and takes it hard to the rim. He isn’t afraid of contact and does a good job getting to the foul line.

Aaron is a matchup nightmare with his combination of size, shooting ability, and budding perimeter skills. He stepped out and knocked down several 3’s during the games and also showed his craftiness in the post. Falzon has a ton of upside.

Conry first impressed us at Hoop Mountain Junior Elite Camp with his ability to lead an offense from the point guard position. Jon is truly a pass first player who looks to make his teammates better, but can score when called upon.

Kyle is a long post player who is a good rebounder and shot blocker. He is active around the rim, keeps the ball high and finishes strong. Kyle has extremely high upside and is a kid with great potential as he gets older and further develops.

Mclean is an active combo forward who is a great athlete. His skills are raw but developing as he is showing the ability to secure defensive rebounds and go coast to coast. He runs the floor well and transition and is strong around the rim.

Brian is a lefty guard who carried over his top performance at Hoop Mountain Junior Elite to Boston’s Best 40 this weekend. Mukasa proved to be among the top guards at the event with his ability to attack the cup, knock down perimeter jump shots, and make plays for his teammates.

Houde is a long post player who has a decent face up game to go with his ability in the paint. He rebounds well and is athletic enough to get out in transition.

Although Raw now, Debrien is a player whos size makes him an intriguing young prospect. He alters shots and rebounds well on the defensive end and is a garbage man around the rim offensively. He does a good job sealing his man inside catching the lob pass up to his hands and putting the ball in softly.