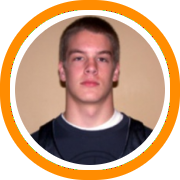 Dominic Borelli, a six-foot-seven big man who anchored the interior for MBR this summer on the AAU circuit, has made a verbal commitment to attend St. Anselm’s College on a full four year scholarship.

St. Anselm’s is a member of the Northeast-10, arguably the most competitive division II conference in the country.

“Dom is an inside out player who can shoot the three but also can go to the block and has moves that allow him to score,” said MBR head coach Carl Parker.  “To me he has more upside than Darren Clough who was an outstanding player at St A's. He has toughness and will back down from no one.”

Pound for pound Borelli was one of the best rebounders we saw this summer and so we expect his most immediate impact may be on the glass for St. Anselm’s.

Ultimately, however, he has the total game to be successful in the NE-10.  He can score around the basket, pull opposing big men away from the rim with his shooting range, defend the post, and, of course, rebound the ball.