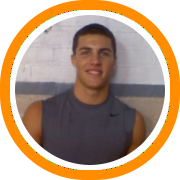 The New England Recruiting Report was on hand Sunday to check out the consolation, Proctor Academy vs. Marianapolis Prep, and championship, Blair Academy vs. Worcester Academy. Here’s a look at the action from Sunday:

Proctor Academy vs. Marianapolis Prep: The consolation game matched two teams that are very familiar with each other, as they have already met once in the young season, with Marianapolis taking the first match up 58-54. Coach Dave Vitale’s squad came out hot, building a 25-6 lead before Proctor was forced to take its second timeout with 10:09 remaining in the first half. Matth Barboza led the way early, using his length to create match up problems. Barboza scored off the dribble on the perimeter, and used his size, posting up smaller guards on the block. Taevaunn Prince led a late first half push for Proctor, using his strong body to penetrate the lane and create scoring opportunities. Prince found Ben Bartoldus for a deep 3 in the corner, cutting the margin to 40-28 at half time.

Ike Azotam got things started in the second half with a dunk in transition. Azotam was impressive all game, showing off inside-out skills and great body control when attacking the rim. Still Proctor chipped away at the lead, cutting it to 7 on a dunk by Grandy Glaze with just over 15 minutes remaining. Glaze had a good afternoon. He has a nice touch around the rim, in addition to a strong body.

Kristian Medina would step up for Marianapolis with a two late 3’s to put the game out of reach. The 2012 wing displayed a consistent lefty stroke from behind the arc. Marianapolis got 7 rebounds from Mike Neal.

Worcester Academy vs. Blair Academy: Bleachers were full for the highly anticipated championship game. It did not disappoint! The games first 6 field goals were from behind the arc. Ryan Lubreski got things going for visiting Blair, knocking down his first two attempts from 3. Lubreski, a senior from North Plainfield, NJ, is a knock down shooter with a great feel. Worcester’s Christophe Varidel would answer, also hitting a pair of 3’s to start the game. Worcester would take a timeout trailing 14-6 with 16:26 remaining. Coming out of the timeout, Worcester knew where to go to get a bucket and set a high ball screen for Billy Baron. Baron used the space to knock down a long 2 off the dribble. Baron’s ability to hit jumpers off the bounce would be huge all afternoon.

Patrick Ackerman, 2011, was impressive in the first half. At 6’11, Ackerman runs very well and has solid footwork for a kid his age.  His short jumper cut the Blair lead to 5 points. With just 1:39 left in the first half Christophe Varidel was hit with an unintentional elbow just above his eye. A big loss for Worcester, as Varidel was playing great when he went down. He would try to return  at the 11:00 mark of the second half but had to again go to the bench because of the blood above his eye. He wouldn’t return for good until there was just 3:16 left in the game. The 6’2” wing from Switzerland has a quick release and is one of the best shooters in New England. He is very dangerous when on the floor with Baron, because both must be accounted for at all times. Blair would go into the half up 43-34.

Hakeem Harris, Bergenfield, NJ, used his strong body at the point guard position to muscle into the lane and finish in traffic or create contact. He would get to the line to start the 2nd half and extended the lead. Worcester would continue to battle, as Oliver Paul Beto responded with a 3 from the wing. Beto shoots it well from behind the arc, and as a sophomore, played with a high IQ making decisions down the stretch.

Worcester took the lead for the first time when Robert Gilchrist slammed down a lob and was fouled in the process. The home crowd went crazy, and Gilchrist converted the free throw, putting Worcester up 58-57 with just over 8:00 remaining. Gilchrist stands at 6’8” and is extremely athletic. He consistently grabs rebounds at the rim and blocks or alters shots on the defensive end.  His offensive game is coming, but he is still a force because with his athletic ability and length he is active around the rim and must be boxed on every shot attempt. He had two big put-backs and his energy was key for Worcester.

With just 1:09 remaining and the score tied at 63, Billy Baron showed everyone in the gym why he’s poised to have a very successful college career. As the shot clock expired Baron hit a 3 from NBA range while being closely guarded.  Blair would respond, as Lubreski answered with another 3 of his own and tied the game at 66. After both teams failed to score with their next possessions, Baron was fouled on his way to the rim with just 16 seconds left in the game. He calmly knocked down both free throws giving Worcester Academy the lead for good at 68-66. Blair’s final attempt would fall short at the buzzer. Baron finished with 25 for WA and took home MVP honors. In addition to having all the physical tools to be a high level point guard, Baron plays with an edge and competes for 40 minutes. Varidel ended with 14, despite the injury limiting his playing time. Harris and Lubreski led Blair with 16 and 17 respectively.