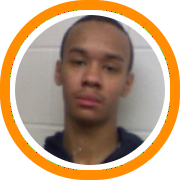 The Beantown Slam Fall League is quickly becoming one of the top pre-season leagues anywhere in New England. On any given Saturday you can stop in to see some of the top public school players (including Gabe Fumudoh pictured above) in the Boston area. The league includes both a boys and girls division and is quickly becoming very popular for high school basketball fans in Boston. On Saturday we stopped in to check out the last four boys games of the day.

Madison Park vs. Boston English
This was never really much of a game as the Madison Park team jumped all over an outmatched Boston English squad that was missing most of their top players. In fact, Madison Park eventually won by mercy rule about midway through the second half. But the story of this game was a Madison Park sophomore who may be emerging as one of the top underclassmen in the city in 6’2 shooting guard Malik Smith. Smith impressed with his deep shooting range, quick first step, and impressive body control inside the lane. Also impressive for Madison Park was 5’11 senior guard Raheem Singleton who is a strong and athletic player with good defensive capabilities and a reliable three-point shot. With the win Madison Park improved to 7-2 in league play and second place in the league. Boston English falls to 2-7 for the season.

East Boston vs. New Mission
Much like the first game this wasn’t much of a contest as East Boston was dominant in a 77-44 victory. East Boston was led by 6’2 junior Jarrett Calhoun who demonstrated his improved perimeter skills by knocking down shots from behind the arc on three different occasions, taking his man off the dribble, and showing impressive floor vision and passing ability. 5’10 junior Derreck Foster is a flashy point guard who can create off the dribble as well as shoot the three. Junior wings Michael Pierre-Lewis and Jeff Cannon were also impressive during the course of the game as was Elezar Clayton a 6’3 forward with very impressive athletic ability. As impressive as East Boston was they did it without two of their most important players in Tyrone Hughes and Aaron Williams. With so many talented juniors this is a team that looked prepared to challenge for at least the next two years.

Charlestown vs. West Roxbury
This was easily the game of the day and probably the best fall league game we have seen so far this year. Charlestown came into the game at the top of the standings with a record of 7-1 while West Roxbury was tied for second at 6-2. But what made this game particularly interesting was the play of Leroyal Hairston a 6’2 senior guard for West Roxbury who spent his sophomore year at Charlestown before playing in California last year. Hairston was impressive throughout the day scoring at will by going to the basket and even knocking down some shots from behind the three-point line. Teammate Gerard Coleman a 6’2 sophomore was equally effective and may have been the top overall prospect we saw all day. Behind that talented duo there weren’t a lot of other shots to go around but that didn’t stop 6’5 sophomore Jerard Coleman from impressing on the low post when given the opportunity. Charlestown, who was missing perhaps their best player in 6’7 senior forward Lance Green, was led by a balanced attack that included 6’0 junior point guard Shabazz Napier, 6’3 junior shooting guard David Riley, junior forward Dorrell Weathers, and long range specialist Raven Dunbar.

The game went back and forth the whole way and at the end of regulation the score was tied at 61 all. In overtime, Hairston made big shot after big shot to give West Roxbury the lead but he and his teammates were unable to get the stops to make it more than a one possession game. With ten seconds left in overtime West Roxbury again had a two point advantage. Charlestown brought the ball down the floor and tried to attack the basket. When no lanes where available the ball was kicked out to Napier behind the three point line who took two hard dribbles to his right and fired on off balance three that went straight through the net to give Charlestown the win.

While this was a tremendous win for Charlestown I think it is definitely safe to say these teams will be seeing more of each other once the high school season starts.

Brighton vs. West Newton
West Newton maybe the two time defending state champions but after losing the duo of Anthony Gurley and Corey Lowe to Wake Forest and Boston University respectively this is a brand new team. 6’2 senior wing Brandon Stephens led the team throughout knocking down several threes and being generally active on both sides of the ball. And despite the fact that they entered Saturday’s game with a record of 1-5 it is obvious that this team has learned from their successes in recent years because they never backed down against a very talented Brighton team.

Brighton was led by the combination of 6’7 junior power forward Gabe Fumudoh and 6’1 senior guard Derek Neal. Neal is a lefty who can flat out score the ball. He was able to connect on a few shots from the perimeter, take his man off the dribble, and get out in transition to get some easy buckets. Fumudoh is a skilled division one prospect who didn’t get as many touches on the low post today as he most likely will once the high school season starts but still showed a high basketball I.Q. and a tremendous ability to pass the ball for a player his size. Chisum Azubuku a 6’2 junior small forward was also impressive with his strength, athleticism, and ability to rebound the ball.

The league will resume on Friday November 10th with the opening round of the playoffs at 6:30pm, 7:30pm, and 8:30pm. Quarterfinals and Semifinals will take place the next day on Saturday the 11th with the Championship on Saturday, November 18th.