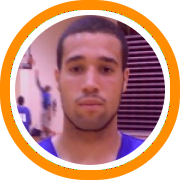 Ultimately, we wound up with two local match-ups as the Playaz and CBC met up in the semi-finals and Expressions and Rivals met in a consolation game.

The Playaz found themselves in the final after dispatching with CBC in the semi’s.  The championship was a similar story as they opened with an 8-0 run, led throughout, and ultimately defeated Grassroots Canada to claim the first ever First Eight title.

Even without Nate Lubick and Naadir Tharpe (who both sat out with injuries), the Playaz put together a stellar team performance as just about everyone stepped up to earn them three hard fought victories.

Dartaye Ruffin, who will head to New Hampton for a post-graduate year, was tremendous all day long.  His offense has improved ten fold in the last year and he was a consistent scorer all day long.  He did most of his damage from the high post in the semi’s, facing up or diving to the rim.  But in the final he went down to the low post, scoring over both shoulders and following up on his own misses.

Anthony Ireland also stood out today.  Despite logging lots of minutes throughout the day, he refused to wear down, and scored consistently from 15 feet and in while also making several impressive assists.

Austin Carroll and Denzel Brito also played well in the backcourt, and both were especially good in the semi-finals.  Carroll opened the game on fire from behind the three-point line and showed his floor vision and passing ability while Brito thrived in transition and made a couple of well timed scoring drives down the stretch of the game to keep the Playaz lead above five.

Alex Francis helped himself today too.  The athletic forward got his head on the rim for finishes and offensive rebounds and was extremely active throughout the day.  Naofall Folahan was helpful off the bench as his length helped to clog the paint defensively and his activity level yielded some positive results around the rim.

The other local semi-finalist, CBC, was led by the interior tandem of Majok Majok who was a consistent physical presence inside the paint, as well as Denzel Jones who is adding to his list of suitors with his size and high motor.

Expressions defeated a Mass Rivals team that was playing without Evan Smotrycz, but regardless it was a very well rounded team performance from Expressions as they seem to be benefiting by some recent additions and peaking at just the right time.

Rod Odom appeared in an Expressions uniform for the first time this season and was very good in stretches.  He competed at a high level and was aggressive offensively looking for his own shot, which generally produced good results.

The real star for Expressions was Billy Baron who played perhaps the best game we’ve seen from him so far this year.  He shot the three well, was lethal coming off the ball screen, got to the rim, and finished with both strength and body control at the rim.

Jordan Laguerre played his best basketball in the morning for the Rivals as he appeared to have close to 20 points in the first half of the opening game and couldn’t be stopped going to the rim.

In the sixteen and under bracket, CBC and Mass Rivals were the only two local teams in action and both found themselves in the losers bracket after falling to Long Island Lightning and The Dukes respectively.

CBC gave away their opening round game after building up an early lead and did their best to do it again in the semi-finals.  They built up a big early lead, but the complexion of the game totally changed when Tavon Allen got knocked out by a blow to the head.  Freddie Wilson and Andre Drummond did enough to push their team on to the victory.

The Rivals u16 team was undermanned as Zach Hurynowicz was out with a sprained ankle, and Jaymie Spears, Cedric Kuakuamensah, and Zach Auguste were all running with the 17’s.  But Joe Mussachia and Donald Celestin were bright spots.