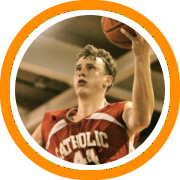 Eight of the most notable Catholic school programs in southern New England squared off this weekend for BasketBull’s Catholic School Showcase at Assumption College. Well over a dozen different college coaches were on hand Sunday to see some of the best private school programs in the MIAA. These are the players who had the most buzz surrounding their performance on Sunday afternoon:

Matt Mobley, 6’2 senior (St. Peter-Marian) - Mobley (20 points) was as impressive today as somebody can be in a losing effort against Catholic Memorial. He carried St. Peter-Marian’s offense and kept the Guardians within striking distance the whole game, often scoring on second or third opportunity tips on the offensive glass. His outside stroke was consistently dangerous and his ability to keep his teammates involved offensively forced CM to keep their eyes on him at all times. While he has made a name for himself because of his loaded offensive arsenal, he also showed with five steals that he has a knack for using his long arms and quick feet to get after it defensively. He lists several Division 2 and 3 colleges, but has his eyes set on a post-graduate year at Worcester Academy.

Matt Droney, 6’4 senior (Catholic Memorial) - The Knight’s lefty showed today he’s so much more than just a shooter. In addition to displaying his tough outside shot, he had several impressive, acrobatic dribble drives to the rim; even when he didn’t necessarily finish them, he got to the line and kept St. Peter-Marian’s defense in check the whole game. He used his athleticism and strength a lot to pull down rebounds and alter some Guardians’ attempts at driving to the rim. Droney ultimately finished with 14 hard-earned points, and was clearly one of the top college prospects who participated in the event.

Dan Powers, 6’2 senior (Catholic Memorial) - Powers (18 points) is a strong guard who plays much bigger than his size. He shot the lights out for the Knights, knocking down some deep three-pointers in the first half. He also moved very well without the ball in a free-flowing Catholic Memorial offensive attack, his cuts were swift, textbook movements to break away from defenders and free himself to get an open look. Whether his outside jumper is falling or not, Powers always exudes confidence on the floor, which is just one reason why he’s wanted by several college programs.

Jacek Louisville, 6’0 senior (Holy Name) - In a highly contested game against St. Joseph’s-Pittsfield, Lousiville (23 points, 10 rebounds) was the best player on the floor for a Naps squad who desperately needed an offensive spark…the entire game. Jacek used his quick first step and tight crossover to get to the rim on several different occasions, often using his short-range jumper or his impressive athletic ability to finish at the rim or get fouled and go to the line. His ball handling was also key for Holy Name. St. Joe’s pressed full court nearly the entire game, and when they did Jacek’s teammates looked to him to get the ball over half-court and set up an offense. He’s another guard who is coveted by several Division 3 programs.

Taverick Roberson, 5’9 junior (St. Joseph’s-Pittsfield) - Roberson had 16 points for St. Joe’s and led what was almost a huge upset over Holy Name. He did a good job of setting up his teammates while his driving and finishing abilities were a threat the entire game. His defense, however, was what made him stand out on Sunday afternoon. With his squad playing a full court press, Roberson was a pest defensively as he forced Holy Name into several turnovers that ultimately kept this one close the whole way.

Chris Siggers, 5’8 junior (Catholic Memorial) - Siggers had everybody in the building watching him after he drained three consecutive treys to start off Catholic Memorial’s game with St. Peter-Marian, but he was able to maintain that attention because of his defense on a guard in Matt Mobley who has quickly established himself as one of the top scorers in the state. While he may only be 5’8, he’s a strong, gritty guard who clearly prides himself on his defensive performances.