AOF Duo Comes off the Board 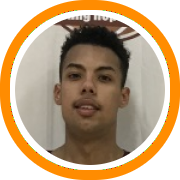 Arnold has been a mainstay of the AOF program in recent years. A Connecticut native, he is a bigger guard with good perimeter size and the strong body to play multiple perimeter positions. He shoots it well off the catch and the dribble and is full of intangibles and leadership tools.

Washington and his twin brother, who doubles as a star on the football field, came to Avon from Florida as post-graduates.

Tyler was committed to division I Air Force in the class of 2016 before opting to re-open his recruitment. Now, his addition is a major score for Hamilton as they strive to climb up the ranks in the NESCAC, arguably the premier athletic and academic league in division III.

Washington is a lively and athletic wing with big shoulders, long arms, and a measured 6-foot-10 wingspan. He attacks in the open floor, has good slashing tools, and is equally impactful on the defensive end as well as the glass.

Arnold and Washington join University of Hartford commit Luka Vasic to give Avon Old Farms three committed prospects in their class of 2017.