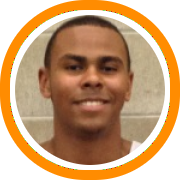 Waltham, MA -- The night session of day 1 did not disappoint. While a number of players were impressive in the early games on Wednesday afternoon, during the night session teams started to become more comfortable with their personnel and a different group players showed well.

Tyree Weston (New Bedford HS) - Weston is a strong point guard who is a great game manager. He can see cuts before they happen, as he hit several of his teammates for open layups off back-door cuts. There is some hype surrounding Weston, and so far he has lived up to his name by performing well consistently throughout Wednesday.  Look for him to leave his mark here at All-Academic Camp in the coming days. Brandon Johnson (Loomis Chaffee) - Johnson is a big, athletic guard who can get in the paint with a variety of moves. He has long arms and can really change a game on the defensive end as both a paint protector and great on ball wing defender. He was impressive in both games today. Glen Smith III (Lexington HS) - A feisty 5'7 junior, Smith III plays an aggressive style of basketball that bothers opponents. He always makes the right play to help a teammate on the offensive end.

Anthony Green (Tilton) – Continued his hot streak and is leaving his mark as one of the best prospects and current players at camp. He has been unstoppable when catching the ball on the low block scoring in a variety of ways.

Zach Baines (Green Farms Academy) – “Potential” is the word many college coaches were using to describe why they liked Baines so much. He has extremely long arms and plays very hard, and he is a guy who could end up breaking out this summer if he is able to continue to show coaches an upward trajectory on his production level.

Peter Hoffman (Haldane) – At 6’5” he is a versatile forward who can do a lot of good things on the court. He is a tough mismatch because he is able to take smaller defenders to the block, but also has the skill set to blow by bigger forwards who chase him out on the perimeter. Vincent Conn (Rye Country Day)- Conn works very hard at his game.  His pull-up game is hard to stop.  He looks to push the ball in transition. He is a very smart player who will be a key factor for his Rye team this year.Tristan Ross (St. Johnsbury) - Ross' shot is fluid and should result in many made shots as the week progresses. His intensity on the court was unmatched in his game tonight.

Ryan Noel (Wellesley) – While Noel may not particularly catch your eye at first sight, the more you watch him, the more you like him. He scored in high volume in his Wednesday night’s game, and also did a good job controlling the glass.

Jay Moran (Hamden Hall) – An undersized natural scorer, Moran has a knack for putting the ball in the hoop in a variety of ways. He can score in all three areas, and has a knack for making tough shots.

Zach Bergeron (New Hampton)- the junior finishes well through contact.He plays with a team-first attitude that should blend in well with his New Hampton squad.

John O’Connor (St. Georges) –O’Connor has a smooth game that could really develop down the road. He has a good looking stroke and a good feel for how to get to spots on the floor where he can be effective. Kyle Henseler (Bishop Hendricken)- Henseler is a tough player who finished tough through contact among bigger players.

Javon Barton (St. Mary’s) – Put together one of the best defensive performances we have seen at camp thus far. Playing in the last set of games Wednesday night, Barton was the type of energizer on the defensive end that ignited his team. Great communicator.

Ross Carter (Rivers) – He is a wide body who is active and plays very hard. Really brought a ton of energy to the court in both games we saw him today.