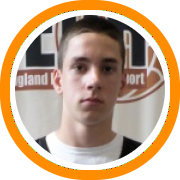 Exposure and education were both at a premium at Sunday’s Elite 75 Academic Experience. With a coaching staff comprised entirely of college coaches from high academic colleges and universities, players got hands on instruction from the very coaches they were hoping to impress. Additional coaches were on hand as well, attending free of charge with a complimentary coaches packet.

When players weren’t on the floor, both they and their families were participating in informational sessions designed to educate them on the college application process, financial aid, life as a student-athlete at a high academic school and much more.

When it came to the work on the floor, there was a deep and talented collection of talent, all of whom are getting it done in the classroom as well.

Here’s a look at the frontcourt players who impressed:

Akim Sanni, Tabor Academy 2017 – At 6-foot-8 with a long and chiseled frame, Sanni is an intriguing prospect for a number of reasons. First, he has the motor to compliment his physical tools. He played very hard at times, ran the floor well and even dove to the floor on multiple occasions after loose balls. Second, he has a skill set, and one that makes him a scoring threat in all three ranges from the frontcourt. He has a touch facing up, handles the ball well for his size and is certainly a factor around the rim.

David Mitchell, Belmont Hill 2018 – Mitchell, who recently picked up an offer from nearby Boston University, has shown great development in his perimeter skill set. His shot is much improved and his ability to create shots off the dribble was on full display. Mitchell has the strength, size, and athleticism that makes it easy to believe that the offer from Boston University will be the first of many for this prospect.

Jovan Jones, Belmont Hill 2018 – Watching Jones and Mitchell go back and forth at each other was one of the highlights of the day on Sunday. Jones, who received an offer from Boston University on the same day as Mitchell, has continued to add to his game, finishing above the rim and scoring at all 3 ranges. Jones' handles and shooting stroke look much improved, and with his size, athleticism, and length, he too should see his recruitment heating up this spring and summer.

Liam Regan, Medway 2018 – He made a name for himself last fall, first with a strong showing at the Elite 75 Frosh/Soph and then a subsequent strong season on the ZG fall circuit. He continued to impress in this setting making a couple of plays to scream of his long-term potential including taking two dribbles from half-court before throwing down a hard dunk. He remains young for his grade and has the athleticism to build off of.

Spencer Riley, Boston College HS 2018 – The lefty had added a lot to his game since this time last year and continues to grow into his long frame. He has a generally good feel for the game but has improved his individual offense, shooting the ball particularly well from the perimeter and mixing in his fair share of straight line drives as well.

Matt McDevitt, Greely 2017 – With a nearly six-foot-seven frame and a skill-set of a guard, McDevitt fits the prototype of the new-age forward who can space you out to the arc and stretch opposing defenses. He’s not just a one-dimensional catch-and-shoot player though, he can also shake you off the dribble, and showed the intangibles to match by running the floor and being vocal on the defensive end.

Justin Connolly, St. John’s Prep 2017 – It was the most impressive performance we’ve seen from Connolly, who has grown another two inches and now stands at six-foot-seven. He looks to be an ultra-versatile, and equally efficient, stretch forward who showed shooting range to the arc, made extra passes around the perimeter, ran the floor and was even able to handle the pass the ball in the open floor.

Hayes Kelchner, Fairfield Ludlowe 2017 – He’s just coming back from injury and was still working a little rust off his game, but there were still signs of ability, including his willingness to battle inside the paint and establish angles to the glass. As he continues to get healthy, and extend his game away from the basket, he’ll only become more productive.

Dakota Wheeler, Wilbraham and Monson Academy 2017 – The six-foot-five forward had an outstanding day, starting strong in the competitive breakdown drills and continuing to impress during game play. He shot the ball at a high rate, showed the ability to score off the bounce in the pick and roll, and punished smaller defenders on the block. He also rebounded the ball at a high rate during the day.

Spencer Kendall, Lexington 2017 - He first caught our eye early in the day, making a series of strong moves in the one-on-one portion of the competitive breakdown drills. He continued to impmress as breakdowns turned to games, showing a high activity rate inside and being generally productive on both ends of the floor.

Mikey Spencer, Cardinal Spellman 2018 – Still just a sophomore, Spencer already has a good sized frame and diligent approach to the game. He ran the floor hard, was active on the inside, fundamentally sound facing the basket and just generally productive. He’ll be one to monitor in the coming years with the potential to play both forward positions at the next level.

Dan Schlakman, Milton Academy 2019 – A talented youngster with a high ceiling, Schlakman is a long and lean youngster who is only just beginning to fill out his frame. He showed good touch and instinct around the rim, the versatility to extend his game beyond the post and generally appeared to be just scratching the surface of his potential.

Dan Shlayen, Roxbury Latin 2017 – Shlayen may be an undersized forward but he’s strong and very crafty around the rim. He’s a good mid-range shooter, has a knack for navigating his way through tight spaces and finishes with a soft touch at various angles to score over and around bigger defenders inside the paint.

Trey Ballew, Portland HS 2019 – A freshman from the state of Maine who already made a name for himself in helping Portland High School to their championship run, Ballew introduced himself to the rest of New England on Sunday. At six-foot-four and 190 pounds, he already owns a good build for his age, and showed some flashes of high level playmaking ability off the bounce.

Justin Fitzpatrick, Burlington 2020- This young prospect seems to have a lot of potential with his great length and athleticism. He has a good feel for the game and so should be on the radar of schools looking down the road.