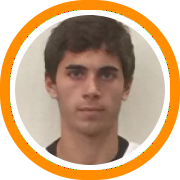 Day 2's recap of the Hoop Mountain All-Academic Camp will be split into two parts.  First, we will profile those campers attending as part of the Class of 2016.  This age group in camp featured many players who attracted the attention of college coaches in attendance throughout the day.

Shy Ulrickson (Mt. Ararat HS)- Ulrickson was one of the most impressive players at camp, and had college coaches on his tail the entire day.  He is a true point guard who anchors his team on both ends of the floor.  Offensively, he does not turn the ball over and always makes the correct decision.  Defensively, he hounds the opposing point guard for the duration of the court.

Connor MacIsaac (The Rivers School)- MacIsaac played tough inside all day.  He is great at rolling to the basket and sealing his defender on his back.  His long arms made him a force on the boards, as well.  His ability to play hard consistently inside (along with his long arms and broad shoulders) make him an intriguing prospect.

Eric Johnson (Passaic County Technical, NJ)- Johnson is a super-athletic 6'5 forward who showed off highlight-reel dunks today.  He can also finish strong through contact, and may have been the best pure athlete in the gym.

Weston Hannon-Bogosh (Worcester Academy)- The 6'3 G/F is a versatile player who also impressed last week at the Elite 75.  He shoots the ball well, but also has a great understanding of how to play.  He does not force his offense, and is a very good passer from all over the court.

Nick Tupanjanin (Milton Academy)- The Milton product finished well at the rim and had a good pace to his offensive game today.  Along with hitting shots from the perimeter, he also rebounded exceptionally well (especially for a guard) today.

Nick Seretta (Northfield Mount Hermon)- Seretta dislocated a finger during his afternoon game, and came back in on his next shift after the trainer popped it back into place.  Besides that obvious toughness and willingness to compete, Seretta pushed the ball quickly in transition and finished strong.

Nicky Shapiro (Crossroads HS, CA)- Shapiro put on a show in the afternoon.  He was making everything he took, and single handily kept his team in the game.  His quick release enables him to get his shot off without much space.

Matt English (Smithtown HS West, NY)- As a 6'5 forward, English competes down low with the best of them.  He grabs rebounds at its highest point, and has a great motor.

John O'Connor (St. George's)- The 6'6 forward hailing from Middletown, CT sealed the victory for his team with four clutch FTs in the final seconds.  He is a solid athlete who can finish well at the rim.

Konrad Dalland (Rondout Valley HS, NY)- A 6'8 lefty forward, Dalland has good range on his jumpshot, and showed solid promise with the development of his offensive game.

Ryan O'Connell (Andover HS)- O'Connell plays with energy at all times he is on the court.  Offensively, he plays within himself and does not force anything.  Defensively, he is a pest who does a really good job of getting under players while guarding the ball.

Billy Lahart (IMG Academy)- The 6'3 Franklin native has a quick release and gets his hips and shoulders square to the basket quickly off the catch.  He isn't afraid to grab tough rebounds, as well.

Jack Lesure (Lake Region HS)- Lesure is a tough player who takes charges and grabs tough rebounds.  He is a team player, and one that teams at the next level need to win with.

Charles Tiedmann (Grace Church, NY)- A 6'7 big man, Tiedmann finishes well inside.  On the defensive end, he is an outstanding post defender because he keeps his hands straight up and does not try to block everything.

Colin Cramer (Thayer Academy)- Cramer showed his usual toughness and grittiness on Thursday.  He is a good defender who really gets after it on that end of the floor.  He knocked down outside shots, too, showing the expansion of his game.

Ned Cramer (Thayer Academy)- Standing at 6'5, the post-playing Cramer rebounds well and has good post moves that get the defense to bite at his fakes.  He displayed good lateral quickness inside before going down with an ankle injury in the afternoon.

Jonah Camberg (Calabasas HS, CA)- A 6'6 forward, Camberg does a little bit of everything well.  He is deceptively athletic, and is a very good passer.  He shows good form on his jumpshot, as well.

Aina Mayona (St. Andrew's)- The guard had a good day shooting the basketball while showing off a nice step-back jumper.  He is very active on both ends of the floor.

Julian Nyland (Melrose HS)- Nyland is not afraid to get his nose dirty, as he is a tough 6'2 guard who goes and gets rebounds over big men.  He also finished well at the rim as the day went on.

Kyle Mak (Bundbrook HS)- The guard shot well throughout the morning session, showing he can be a big threat from the outside in helping to space the floor.