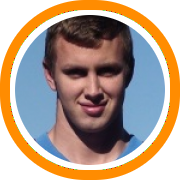 It has been a very busy few days for three of NMH’s more notable returning players.

Matt Brown and Joe Sharkey were in action last weekend at the Rumble in the Bronx.  Brown starred with the Mass Rivals 17-and-under team, helping them to a 2-1 record in their pool, while Sharkey ran with his Expressions’ 16-and-under team that advanced all the way to the semi-finals.

When the tournament ended on Sunday, both players traveled to Princeton University, along with NMH head coach John Carroll, for an unofficial visit.

Following the visit, they got back in the car and began the long drive south to Charlottesville, Virginia and the University of Virginia’s Elite Camp, which took place from Monday to Wednesday.  They had to make a quick stop in Baltimore to pick up Hector Harold, who flew in from California in order to attend the camp.

The trip ended up being well worth it.

Not only was the UVA Elite Camp, run by newly appointed head coach Tony Bennett, filled with some of the top players from around the country, but all three members of the NMH trio played well enough to set themselves apart from the competition as they were named to the camp’s top 20 game.

Other players selected for the game were Michael Parker (87th ranked player in the country by Hoopsccop with offers from Virginia, Maryland, Miami, and Florida), Matt Derenbecker (85th in the country by Hoopscoop, Louisiana Gatorade Player of the Year with recruitment from LSU, Tennessee, Florida, and Stanford), Madracus Wade (104 by Hoopscoop), Alex Rossi (15th best small forward in country according to scout.com), and other high major talents including Ricky Kreklow, Ben Brust, Kevin Noreen, Joe Harris, and Tom Droney.

On the way back to Massachusetts, the trio stopped at Yale University on Wednesday for their second unofficial visit of the week.

Talk about making the most of a few days….

Note:  Harold and incoming NMH forward Evan Cummins will leave this Friday for the University of Pennsylvania’s Elite Camp.