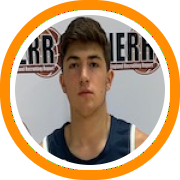 The 2019 Scholar Roundball Classic came to an exciting finish on Sunday with six more games on the docket.

There were 20+ college coaches in the building by the 10am tip between The Hill School and Phillips Academy of Andover and that number continued to grow throughout the day as the event attracted 30+ coaches in each of the three days.

The Hill School was back on the floor less than 24 hours after a heartbreaking overtime decision to Exeter and it seemed like a case of deja vu initially as they built up a double-figure second half lead only to have Andover come storming back. Dallion Johnson was the catalyst as his trademark tough shot-making was on full display in front of his future college coach, Penn State's Pat Chambers. While Johnson showed his full offensive repetoire, the late run fell just short as a well-coached and balanced Hill squad made enough plays down the stretch to earn a hard-fought win. Daniel Nixon came off the bench to score a team high 16 points while fellow junior Gabe Dorsey had 15 behind his southpaw shot-making ability. Unsigned post-grad Toni Buchanan was a dependable post presence inside with good footwork, physicality, and rim-running to the tune of 13 points while Caleb Dorsey, who will join Johnson at Penn State next year, added 10. Noah Dinkins and Nick Thomas chipped in with 10 each for Andover.

On the heels of Saturday night's win over NMH, Perkiomen refused to take their foot off the gas and delivered another impressive performance on Sunday morning. Balance was the key as nine different players got in the scoring column and no one finished with more than 12. Unsigned 2020s Steve Payne, Gilbert Otoo, and Josh Odunowo were all again in double figures and continuing to show why they are all scholarship caliber players. Sophomore wing Brandon Legris knocked down a handful of threes as well. Lafayette commit Ryan Zambie led Choate with 19 while dual-sport athlete Brody Grebe chipped in with 12. 6'9" big man Tristan Bounds and NYU commit Hayden Peek added 8 each.

Another big stage brought yet another big performance from NHS sophomore forward Alex Karaban as he continues to exceed all expectations in his first season in the prep ranks. He was dominant on Sunday, pouring in 27 points along with 14 rebounds while showing the versatility of his skill-set. Meanwhile, unsigned 2020 Jahmyl Telfort continued to impress as well with 24 points utilizing his physical aggressive style. Junior Evan Guillory added 11 while Canberk Kavsuk had 10. Matt Becker had 9 but showed off a balanced floor game as he continued to pass like a big point guard and rebound very well from the perimeter. Tyler Kolek led the way as usual for St. George's with 25 points and 5 threes. But he had plenty of help as Samuel Adusei scored 23 points while having arguably his best performance yet on a big stage. Junior guard Dominic Mello finished with 12 points while Jayden Dummett was a constant presence inside with 9 points and multiple rebounds.

A short-handed NMH team reeling from a late Saturday night loss showed their resolve with a convincing showing on Sunday. They opened the game with an energetic run and held a commanding lead for the entire first-half. Loomis mounted a run in the second and cut it to ten at one point but that was when Ben Callahan-Gold put the team on his back and splashed four consecutive threes (he had 7 on the game). The backcourt of Zach Taylor and Avery Brown was dominant from start to finish though. Taylor tied a career high with 33 points, including 6 threes of his own, while Brown broke an NMH single game record with 17 assists to go along with 14 points. Harvard commit Sam Silverstein added 12 while unsigned post-grad big man Prince Moses added 11 and 9. Loomis was led by Dayton commit RJ Blakney, who again distinguished himself as one of the top players in class A, with 23 points. UNLV commit Reece Brown added 19 while showing a continuously evolving skill-set to match his freakish athleticism. Junior Nate Santos added 19 as well while showing no effects from the ACL injury that cost him the better part of the last year. St. Anselm bound guard Josh Menard had 11 points and 3 threes.

This dramatic double OT thriller was simply a battle of wills as AOF came into the game without junior big man Tyler Warner and SPS was missing Indiana bound forward Jordan Geronimo. With both squads short-handed, Matt Mensia emerged as the dominant force on the floor, scoring a game-high 27 points while showing his size and strength on the perimeter along with a versatile attack. Post-grad Matt Brand added 17 while Kenneth Soares scored 16. Junior Anthony Clayton also finished in double figures with 10. While St. Paul's was undoubtedly disappointed in the final result, the team proved their depth in this one. Junior captain Jack Anderson had a breakout performance with 25 points, putting the team on his back at various points. Sophomore James Morakis showed his upside with 15 while shot-maker Cody Appleton and Conor Dunleavy were in double-figures as well.

Four different players scored in double figures as Millbrook eventually pulled away from what was a very close first half. The junior guard tandem of Seth Caslin and Charlie Weisberg led the way with 15 each. Caslin showed his perimeter size and versatile attack while Weisberg splashed deep jumpers and showed a soft floater in the lane to match. Another junior, Nick Benton, got in on the action as well, contributing 10 while showing his power on the perimeter. 6'9" big man Justinas Norkus added 12 while showing a fundamentally sound tool-set around the paint and evolving inside-out skills. For Tabor, freshman guard Flynt Whitworth put his name on the map with a team high 17 points while showcasing his very bright future. 6'9" junior big man Griffin Walbridge is an intriguing prospect for academic college coaches to keep an eye on as well.