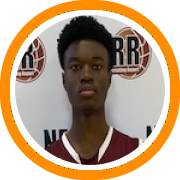 Friday night’s Elite 75 Academic Experience was as good as advertised with 75 players from New England and New York having the opportunity to play in front of over 30 college coaches from academic institutions including the likes of Williams, NYU, Case Western, Middlebury, Trinity, Vassar, Hamilton, Colby, Brandeis, Connecticut College, WPI, Babson and numerous others.

By the time it was all said and done, a number of players had managed to distinguish themselves.

Here’s a look at the top wing prospects in attendance.

Josh Reaves, 6’4, 2020, F, South Kent (CT) – One of the more physically dominant players in attendance, Reaves is a powerful athlete with a high-motor. He gets downhill extremely well, has a lot of playmaking ability in the open court, and even sees the floor well. As his jumper continues to evolve, his half-court game will only continue to evolve.

Dan Braster, 6’6, 2020, G/F, Cushing Academy (MA) – His combination of perimeter size and skill makes him a very intriguing long-term prospect as he continues to develop his assertiveness. He shoots a pure ball from long-range, can make tough pull-ups off the dribble, and also showed a developing passing acumen.

Owen Moreira, 6’5, 2022, G/F, St. John’s Shrewsbury (MA) – He might have been the youngest player in the field but he more than held his own while showing off his long-term potential. Moreira is a skilled wing with good size and some very obvious talent.

Garrett Kirk, 6’4, 2020, G/F, Northfield Mount Hermon (MA) – His motor and work-ethic have been his calling cards since he first arrived on the scene a couple of years ago, but Kirk is making rapid strides with his skill-set and overall impact as well. He made shots, passed it well, and showed a good overall feel while also standing out on the defensive end.

Brian Geitner, 6’4, 2020, G/F, Tolland (CT) – A coach’s son and well-built wing, Geitner combines a polished skill-set and high IQ with perimeter size and a strong body. He shoots it well, knows how to use his frame to get to the rim, and is smart across the board.

Blake Maguire, 6’4, 2021, G/F, Norwell (MA) – A high-level shot-maker with perimeter size, Maguire has a game that will clearly translate to the next level. While his shooting is the first thing to jump out at young, his overall decision-making, willingness to play within himself, and consequent efficiency was also impressive, especially for an underclassman.

Jason Mahoney, 6’4, 2020, SF, Governor’s Academy (MA) – Mahoney is a strong-bodied wing who plays hard and impacts the game in various ways. His competitiveness, defense, rebounding, and finishing were constants. When he starting making threes, it also opened up his ability to straight-line drive and attack close-outs.

Akili Evans, 6’3, 2020, G/F, Holy Cross (CT) – A wiry and athletic wing with versatile scoring tools, Evans was able to slash his way to the cup throughout the course of the night but also has the ability to make shots, and make them in bunches, when he gets going.

Jahkai Pettway, 6’4, 2020, SF, Hamden Hall (CT) – A strong, physical, and athletic wing, Pettway has always been aggressive but is adding more weapons to his arsenal. He can get downhill and play through contact when he picks his spots and has the potential to impact the game in a variety of other ways.

Jack Richard, 6’4, 2020, G/F, Rivers (MA) – With good perimeter size and solid ball skills, Richard impressed on Friday night. He shoots it from the perimeter, has some playmaking ability, and only needs to keep finding different ways to impact the game.

Michael Acquaah-Harrison, 6’4, 2020, F, Marianapolis Prep (CT) – An ultra-versatile player, Acquaah-Harrison was athletic and very active on the glass. He also excelled at getting downhill with the ball and was able to start the break himself after pulling down a defensive rebound.

Deandre Ortiz, 6’4, 2020, F, Marianapolis Prep (CT) – He’s a versatile forward and unorthodox scorer who isn’t always overly refined with his attack but just finds ways to put the ball in the basket. He has good size, strength, and a herky-jerky style that makes him hard to guard.