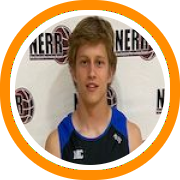 With 731 teams from all across the country flocking to eastern Massachusetts for the 8th annual Zero Gravity's National Boys Finals, Saturday proved to be a great day of grassroots basketball.

Today we will recap individuals who stood out in each respective high school division.  We will provide both individual reports & championship updates as the day progresses on Sunday, as well as an All-Tournament team shortly after. Please follow @NERRHoops or @ZackSandberg to stay updated with all the action.

Wildens Leveque (Mass Rivals, 2019)- Rivals' physically-imposing big man seems to swallow the ball when he rebounds. Effective on both the offensive and defensive glass, Leveque rebounds out of his area as well as anybody in New England.

Mitch Doherty (BABC, 2019)- Doherty continues to prove his elite feel for the game and unique ability (considering his position) to get others involved in the offense. His ability to anticipate when his teammates will be open sometimes even surprises them.

Alex Karaban (Expressions, 2022)- Karaban has a feel to the game that we do not see at such a young age very often. Along with being an excellent passer, Karaban has great range on his jump-shot/  He uses his length well on defense, and anticipates switching quickly so there are no communication mixups.

Kadary Richmond (Team New England, 2019)- The big wing was more efficient on the first day of the ZG Finals.  His jumper was falling early, and it was noticeable how he goes from moving side to side (east to west) to getting downhill (north to south) very quickly, making it difficult for his defender to get a read on what he's about to do.

Mykel Derring (Middlesex Magic, 2019)- Derring gets his shot off about as quickly as anyone in New England. A combination of his high release and ability to get his shoulders square to the hoop instantaneously make him incredibly hard to guard.

Joey Reilly (NE6, 2019)- Reilly's shooting usually headlines his game, but his quick first step & good lateral quickness add an element to his game that will serve him very well at the college level.

Dan Schlakman (Rise Above Basketball, 2019)- A team effort lifted Rise Above to a quality weekend so far, but Schlakman's play has especially stood out.  He can dribble, pass, shoot, run the floor, move without the ball, rebound & defend.  His multitude of skills will make him valuable moving forward (to next high school season and beyond).

Noah Downing (Boston Bobcats, 2020)- The guard really impressed at the Super 16, and he kept that streak going on Saturday.  He nailed a barrage of 3-pointers in the first half of their final game of the night, but also made some acrobatic moves around the hoop to convert his layups.

Malachi Hazelton (Mass Rivals, 2020)- Hazelton absolutely thrived in his role for Rivals. He was the loudest person on the court because of his thorough talk, but seemed to focus much more on his defense than his offense. Possessing elite lateral quickness, no one was able to get by him. He rebounded on both ends, and set bone-crushing screens on offense to free up his teammates.

Travis Evee (Metro Boston, 2019)- Following his graduation from BC High & headed for a post-grad year at Vermont Academy, Evee is quick to get in the lane & draw his defenders to him. He keeps his head up in the paint to find his teammate either outside or on the interior, but he isn't afraid to challenge a shot blocker inside.

John Lowther (Rise Above Basketball, 2019)- Lowther has really come on strong over the past couple weeks. It is easy to see how hard he consistently plays, but his activity leads to extra possessions for his team. Lowther is also a solid outside shooter.

Justin Allen (PTT, 2019)- Allen scored inside on a high percentage of his touches.  He rebounded well & ran the floor hard, a surefire way for a big man to get easy baskets!

Jack Schaake (Northeast Elite, 2019)- Schaake can surprise you with his bounce. He attacks the rim & rebounds well. He has good size at 6'7 and a frame that will continue to fill out.

Ryan Stewart (Fidelity House, 2019)- Stewart is a knockdown shooter. He stretches the defense by the threat of him releasing it past the 3-point line.

Samuel Adusei (Central Mass Swarm, 2020)- Small but powerfully built, Adusi can elevate in traffic. He is an unselfish point guard who is improving at playing off ball screens & seeing where else he can get his teammates open shots.

Xavier Bettencort (Philly Freedom Stars, 2019)- The lefty showed very good range on his jumper. He is crafty with the ball on the perimeter and changes speeds in a manner that allows him to get inside, opening up the lanes for a drive & kick.

Thatcher Stone (WrightWay Skills, 2020)- Still physically growing into his body, Stone can be a high-level shot maker as he works to get his shot off a little quicker.

Matt Constant (Expressions, 2021)- Playing up, Constant lives up to his last name by always bringing toughness & the ability to compete to the floor.  e battled (successfully) against guards two and three years older than him all day.

Matt Niemczura (BABC, 2019)- Niemczura was a primary beneficiary of offense created by Doherty & Brycen Goodine for BABC, but the MacDuffie product took full advantage of his opportunities by burying 3's over the course of the day.

Mikey West (New Haven Heat, 2019)- West left it all out on the court on Saturday, as he is the engine that keeps the Heat glowing.  He inspired his teammates with his hustle and energy.

Jhamyl Fricas (BABC, 2021)- The 6'2 guard put on a show on Saturday afternoon.  With the potential to be one of the most explosive players in his class, Fricas had The U rocking with his high-flying dunks & putbacks.

Sheer Akot (DC Blue Devils, 2021)- A super athletic wing, Alkot has the ability to score over his defenders while finishing at the rim or using his high release to shoot over defenders from the perimeter.

Bobby Sommers (Mass Select, 2020)- Another guard who has continued his strong spring play into the early summer, Sommers is about as rock-solid a guard as you get at this age. He can score it with the best of them, but is a willing facilitator and plays hard & tough.

Njavan Stewart (Mystic Valley Pride, 2020)- The Newton South product is up to 6'3 (and reportedly still growing), and showed an all-around game that should bode him well in the upcoming winter season (plus shooting range that will have defenses shading him two steps, opening up driving lanes for his teammates).

Matt Mulvey (Middlesex Magic, 2020)- Mulvey was the model of consistency for the Magic on Saturday.  He is more than capable of hitting outside shots, and is getting more comfortable attacking the paint.

Heston Tucker (PTT, 2020)- A 6'4 combo forward, Tucker lead PTT in scoring & rebounding. He is an important cog for PTT, and is not afraid to be known as both a main scorer and someone who needs to do the little things to help his team win.

Miles Fiore (RI Rivals, 2021)- Playing up a division, Fiore lead his team in scoring in a key win for them.  He is able to score at all three levels, and proved he could do it against older competition on Saturday.

Jarnel Snow Guzman (BABC, 2020)- The small point guard shot the ball very well early in the day, then proceeded to get others involved at a rapid rate. With weapons surrounding him, he knows when to cut his drives off and dish to his open teammates outside.

Jack Staiti (Metro Boston, 2020)- Shaini averaged 20 ppg for a scrappy Metro squad. He has emerged as one of the primary scorers on a talented Metro Boston team that should be fun to watch for the next few years.

Karl Jeannot (DC Blue Devils, 2020)- The thick front court player is now expanding his game to the perimeter with improved ball skills. He is noticeably bouncier than we have previously observed, as well.

Shy Odom (Boston Bobcats, 2022)- Odom is raw yet productive at an early age. He gobbles up rebounds and has a good feel for where to attack is defender in the post. If he keeps working, Odom can become a really impactful player at a high level.

Shea Doherty (BABC, 2021)- Long & lanky, the youngest Doherty provides energy & rebounding to go along with his raw offensive talent. He crashes the offensive glass hard and runs the floor looking to score.

Max Poulton (Team New England, 2022)- The young wing impressed as a part of TNE's young core.  Known as a shooter, Poulton started to show the evolution in his game with the ability to go right by his defender and get to the basket. He also crashes the offensive glass on a consistent basis.

Dom Campbell (Northeast Elite, 2021)- A big bodied post, Campbell has the makings of a solid player down the road because of his hands and feet.  He also runs the floor hard, and is getting healthy after not being 100% for the Super 16 (but still fighting through it & playing hard at the time).

Brendan McNamara (Middlesex Magic, 2021)- The next point guard in a long line of great Magic PGs, McNamara gets everyone on his team involved and keeps the ball on a string. His knowing of where everyone is on the court allows him to get the ball to an open teammate more often than not.

Chris Rey (Boston Bobcats, 2021)- Having gone through a recent growth spurt has not taken away Rey's ability to shoot. He is a young sniper that becomes a more intriguing prospect due to his height.

John Paulino (RI Elite, 2021)- Shifty with a tight handle, Paulino is a smooth guard who may have a couple more inches to grow. He had complete control of the show for RI Elite's 9th grade team.

Donte White-Barbosa (ASA, 2021)- A new name to emerge, White-Barbosa impressed with his high-IQ style of play and great court vision.