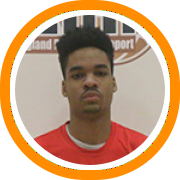 The 2018 Elite 75 College Showcase hosted some of the best rising seniors and post-graduates in New England in with over 60 college coaches from the division II and III levels looking on.

While we profiled the best big men in the field yesterday, today we’ll shift our focus to the forwards, an admittedly ambiguous term which encompasses players capable of playing multiple positions and impacting the game both around the rim and on the perimeter.

John Kelly, Williston Northampton – The 6-foot-7 shooter is a gym rat and knockdown shooter who stretches the floor and has the type of game that easily translates to the next level. He’s fundamentally sound with a high basketball I.Q. and willingness to play the game the right way. He’s also made strides on the defensive end and proven himself to be a scholarship caliber player.

Ben Onek, Deering – A long and athletic lefty with a chiseled build, Onek can do damage in the paint but is actually at his best facing up and attacking off the dribble. While he is still learning to pick his spots and see the floor off the dribble, Onek plays through contact and uses his length when in attack mode. He’s also a good rebounder and potentially versatile defender.

Matthew Fleming, Bangor – Recently back from an elbow injury suffered earlier this spring, Fleming reminded everyone why he is one of the best in Maine. He has good hands, instincts, and a rapidly expanding frame. He’s talented enough that he could stand to be more assertive and has a naturally soft touch that should allow him to develop as a shooter.

Will Engelhardt, Kimball Union – An unselfish and skilled forward with a pure release, Engelhardt shoots it as well as he shares the ball and fits a profile that is in very high demand these days from college coaches. After being largely under the radar this spring, he was the subject of a lot of “who’s that?” type questions on Tuesday and looks poised for a big summer.

Joe Pridgen, Governors Academy – He spent his spring being a jack of all trades in the EYBL and came here to show his playmaking ability. Pridgen is powerful with a good frame and high motor. He was in attack mode from start to finish, able to play through contact and overpower the vast majority of defenders, and a definite mismatch problem with an almost positionless type game.

Frankyn Batista, Hyde – A big wing with an emerging frame and enough size to play and defend multiple positions, Batista has a very intriguing physical profile and clear upside. He defends well, plays with a motor, finishes at the rim, gets his hands on a lot of balls, and even blocks shots. As his offensive game continues to evolve, his stock will continue to rise.

John Korte, Woodstock Academy – Korte was one of the better surprises of the night. He’s both filled out his frame and expanded his game in the last year. He plays hard, rebounds consistently, and is active on both ends. He goes right into contact off the dribble and will learn to both pick his spots more efficiently as well as develop his shooting stroke during his post-graduate season.

Denali Burton, Danbury – He’s far from a finished product but possesses a lot of tools that can’t be taught. He’s a good sized wing with a frame that is just beginning to fill out. A bouncy athlete who is all over the rim as a finisher, Burton also has soft enough touch to develop as a shooter in the coming years. He plays with consistent energy, has a quality motor, and a bright future.

Jeff Hunter, Assabet Valley – Hunter announced his arrival by throwing down the dunk of the day, over top of a pair of defenders. It wasn’t an isolated incident either as he dunked everything around the rim throughout the course of the day. With a lanky built and still unpolished game, Hunter is just scratching the surface of his potential but clearly possesses a high ceiling as he continues to develop

Nick Fiorillo, Scarborough – Fiorillo is coming off a breakout junior season and is a very intriguing prospect moving forward. He has good size at 6-foot-7, long arms, a good instinctive feel around the paint, and a very soft natural shooting touch from the perimeter. He still needs to fill out physically, be more active on the glass, and mobile away from the paint defensively but he’s definitely one to watch closely moving forward.

Wol Maiwen, Edward Little – A dominant interior threat in the Maine High School ranks, Maiwen is a high level athlete with a high motor. While extending his skill set will be a key moving forward, he proved he could score and rebound over bigger players inside the paint and also possesses the mobility necessary for increased versatility on both ends of the floor.

Jack Shea, Glastonbury – He’s a late bloomer who has grown a couple inches in the last year but nonetheless maintains a solid build. Shea, who had a strong junior campaign at Glastonbury, has also continued to add to his game and was very polished in the mid-range area on Tuesday night, knocking down a series of 15 footers.

Max Bonney-Liles, Alvirne – A rising post-grad who has yet to finalize his destination, Bonney-Liles showed versatile tools on both ends of the floor. He has a solid foundation of skill to develop, pretty good length, and a frame that should really benefit from a year inside a prep school weight room.

Abdou Barry, Kipp Academy – His game is that of an undersized big at this point while his body type suggests increased versatility could be down the road as he continues to develop and learn the game. He’s had a strong high school career to date and has plenty more potential moving forward.

D.J. Smith, Wheeler – A late add to the field, Smith is an athletic wing with enough size and strength to play both forward positions. He was good in transition and also a deceptively heady passer. As his ball-handling expands, he’ll become all the more versatile on the offensive end.

Chris Barry, Bridgewater Raynham – A 6-foot-5 forward was a consistent presence on the glass, Barry also showed an intellect and I.Q. for the game that might have been subtle against more explosive athletes but was nonetheless noteworthy by multiple college coaches.

Josh Schibi, Lewis Mills – A high academic forward, Schibi came in as a virtual unknown beyond central Connecticut but left with NESCAC interest. He’s not necessarily a dynamic creator at this level but he fits in with offensive structure as he’s a solid shooter who knows how to play.

Paul O’Toole, Dexter – Another high academic product, O’Toole impacts the game without needing the ball or a certain number of shots. He has good hands, gets on the glass, and plays with a blue collar approach while being content to play off others offensively.

Jack Lehoullier, Pembroke Academy – He spends the high school season playing around the basket but can straight line drive out to about 15 feet. He’s at his best defensively though as he combines a strong body with relatively quick feet, good anticipation, and consistent effort.

Ibn Khalid, Hyde – An incoming post-graduate at Hyde, this 6-foot-4 wing plays with a ton of energy and has clear long-term potential to develop. He has good length, can knock down open shots, and is a solid two-way player who defends well.