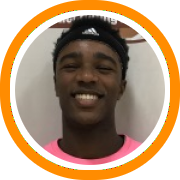 The stars were out on Saturday at St. Andrew's School as some of New England's top prospects delivered huge performances while five-star national prospects like Anfernee Simons and Luguentz Dort delivered shows of their own.

Here's a game by game rundown of day two at the Zero Gravity Prep Classic.

Beaver Country Day 68, Rocky Hill 62 - This was an uphill battle got Beaver Country Day as they came away with a huge overtime win against Rocky Hill. As the game went down to the wire ZG player of the Game Guard Jayden Depina came up clutch as he had a game high 22 points to go along with 4 threes. Rocky Hill Forward Steven Lora kept the game close by scoring a team high 16 points to go along with 6 rebounds and 2 steals.

Our Savior 63, Ridley College 59 - With this extremely fast paced matchup, Ridley came out swinging, scoring a quick 10 unanswered points early. Our Savior quickly rallied with their leading scorer, Zaire, leading the team with 19 points and 6 offensive boards. Ridley was led by Marcus Upshaw with 12 points.

Lee Academy 85, London Basketball Academy 63 - Lee Academy was unstoppable Saturday afternoon, pushing the tempo up the floor with their crisp passing. The team was led by their Zero Gravity Player of the game, Meikkel Murray, who scored 24 points (18 in the first half alone) with 7 offensive boards and 5 assists. London Basketball Academy was led by Okay Djamgouz, who had 27 points (21 from behind the arc).

Knox School 69, Millbrook 53 - After only a single point lead going into the second half, Knox School was able to pull away within the last couple of minutes to seal the victory. Led by Justin Figueroa with 15 points and an impressive second half from the Zero Gravity Player of the Game Nick Cazacu, Knox was able to win the game despite an impressive 13 point performance from Jayden Reaves of Millbrook.

Rivers School 69, Loomis Chaffee 64 - Freshman phenom guard Terrence Clarke earned the honors of Zero Gravity player of the Game as he filled up the stat sheet scoring a game high 32 points to go along with 5 threes, 8 rebounds, and 5 assists. He impressed all viewers in attendance with his athleticism and overall skillset. Colin Corrigan also provided outside shooting by hitting 4 threes to go along for 12 points. Loomis Chaffee forward Nelson Bachie had a solid game as he finished with a team high 21 points to go along with a pair of three pointers.

Brewster Academy 92, Hotchkiss 56 - This game was all Brewster from the get-co. Their well-rounded attack led by Wake Forest commit Isaiah Mucius, who was crowned Zero Gravity Player of the Game, had a game high 18 points, while guard B.J. Shaw finished up with 13 points to go along with 3 triples. Washington commit Nate Roberts did a good job finishing around the rim and providing rim protection. Hotchkiss School guard Ryan O’Neill led the way for his squad scoring a team high 13 points to go along with 5 assists.

The Masters School 56, Gould Academy 55 - This was perhaps the best game of the night in the Jones Gym. The Masters School was able to come back to win despite a nine point halftime deficit. Taelon Martin, the Zero Gravity Player of the Game, led all scorers with 22 points. Camry Givens was a huge help on offense and drew a big offensive foul towards the end of the game. This high-energy team would not quit throughout the game and always found a way to come back. Gould was led by guard Daniel Buie and big men Wildens Levesque and Stephane Ingo. Levesque and Ingo were huge presences in the paint and constantly altered shots.

Saint Andrews School 76, New Hampton School 73 - The atmosphere was unreal in the gymnasium as both teams fought till the end. Cole Swider came up huge to lead the Saints to an upset win over New Hampton. He finished the night with a game high 28 points, including the 2000th of his career, to go along with 7 rebounds. Syracuse commit Brycen Goodine did a good job setting up his teammates scoring 10 points to go along with a game high 8 assists. New Hampton guard Mika Adams-Woods played his heart out for the Huskies squad as he finished with a team high 23 points to go along with 5 assists. Mason Webb also provide offensive power by scoring 15 points connecting in all of his 3 three-pointers. Stanford commit Keenan Fitzmorris did a good job running the floor and finishing around the rim.

Brooks School 71, St. Luke’s School 57 - Brooks School came out strong from the tip and controlled the game. Brian Wright-Kinsey had 17 points, 12 of them coming from behind the arc; it didn’t seem like he could miss today. Justin Connolly also had a big night with 16 points and controlled the paint. Jonas Harper of St. Luke’s had 16 points and the 6’3” guard hit pivotal shots throughout the game.

Putnam Science Academy Prep 70, TRC Academy 61 - The last game of the night saw PSA Prep take over in the second half. Jose Perez led all scorers with 22 points. Perez, the Zero Gravity Player of the Game, controlled the pace of the game for all 40 minutes and was a constant offensive threat. TRC Academy did not go away easily though as Adong Makuoi had a big second half performance, dominating the inside and scoring 13 points in the second half alone. PSA was able to pull away during the last few minutes of the game, securing their victory.