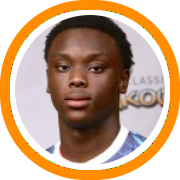 Over the course of the last week the New England Recruiting Report has looked back on the high school season in all six of the state athletic associations. Now NERR contributor Mike Yagmin puts his stamp on the season that was with his own All-New England Team, stemming exclusively from those non-prep ranks.

Mustapha Heron, Sacred Heart (CT) '16 – It's almost fitting that Heron won't find his name alongside other 1st Teamers because he's simply in a class by himself when it comes to players from the state associations. Heron returned to Sacred Heart after a brief stay at Wilbraham & Monson three years ago and was encouraged to take partial ownership of John Carroll's program. All he's done since is lead the Hearts to 3-straight CIAC State Championships, solidify his standing among the top-30 players in the nation, and putting his resume in the mix with some of the most celebrated players in the history of Connecticut High School Basketball. After scoring over 2,000 points in just 3 seasons, Heron will take his talents to Auburn where he'll be encouraged to assume responsibility and jumpstart another basketball program. Bruce Pearl will be waiting with open arms.

Tyrn Flowers, Sacred Heart (CT) '16 – Heron's trusted wingman who developed a reputation of his own with a Tyshaun Prince-style body and game, mixed with a Matt Barnes-type chip on his shoulder. He'll take his swagger, smooth stroke and elite length to UMass next season.

Jakigh Dottin, Cambridge, Rindge, & Latin (MA) '17 – ESPN Boston Mr. Basketball after leading Cambridge to a State Championship during his junior season. Dottin will return, along with the core of Cambridge's title team, to terrorize the Mass public ranks once again next season.

Keith Brown, Pelham (NH) '16 – New Hampshire Gatorade Player of the Year will continue his basketball career at Endicott after averaging 28.5 points, 10.8 rebounds and 3.9 assists during a tremendous final campaign.

Tyonne Malone, Putnam Tech (MA) '16 – One of the most successful careers in Western Mass history. Malone helped put Putnam in the mix for a title all four years while expanding his individual role each season, culminating with a Western Mass MVP Award while averaging 19 points and 11 rebounds during his senior season.

Justin Mazzulla, Bishop Hendricken (RI) '17 – The 6'3" guard was named Gatorade's Rhode Island Player of the Year after leading his team to a State Open Championship., filling up the stat sheet with 15.8 points, 10.6 rebounds, 3.0 assists, 2.0 steals, and 1.1 blocks per game.

Mark Carbone, East Catholic (CT) '16 – Led his relatively young team to its 2nd state championship in 3 seasons. Put on an absolute clinic with 34 points, hitting six 3's including a game-tying 4-point play with 0.8 seconds remaining, against Windsor in the CIAC Class L semifinals. May prep prior to playing for the University of San Diego.

Brandon Twitty, Catholic Memorial (MA) '16 – Led CM to a south sectional championship during his senior season and will bring his long distance repertoire to Stonehill in the fall. Twitty stepped up all season, averaging over 20 points per game and refusing to leave the state semifinal game against Cambridge despite an ankle injury, scoring 16 points.

Ben Shungu, Rice Memorial (VT) '16 – The Vermont Gatorade Player of the Year concluded a wonderful career with 21.9 points, 5.9 rebounds, 4.1 assists and 3.2 steals per game. The powerful 6'1" guard stays in-state and will continue his basketball career at the University of Vermont this fall.

Charles Fisher, Sacred Heart (CT) '16 – Unselfish pitbull could've averaged 20/8/5 on any other team in the state but traded personal accolades for state titles and a shutdown defender role on New England's best team

Thomas Coyne, Falmouth (ME) '16 – Averaged 25.3 points a night. Headed to Bates as part of one of the NESCAC's top incoming freshman classes

Jared Simmons, Newington (CT) '17 – Averaged 21.2 points and 7.1 assists while leading his squad to the semifinals of CIAC Class L tourney

Preston Santos, Bishop Hendricken (RI) '18 - Future is bright for the sophomore wing who helped led his team to Rhode Island State Open Championship. Santos can get to the rack with regularity and has a nose for the ball on the boards.

Chris Herren Jr, Portsmouth (RI) '18 – Averaged 25+ points a night during his sophomore campaign. 6'2" guard has a smooth game, quick trigger, and deep range. There will be plenty more 30-point nights out of Herren Jr. in the future.

Chris Camille, Brookline (MA) '19 – Averaged 13.7 points a night during his inaugural high school campaign and continued to improve as the season wore on.

Byron Breeland III, Hillhouse-New Haven (CT) '18 – Super smooth soph might've saved his best performance for last, scoring 23 points in CIAC Class LL Title Game against Weaver. Long, skilled 6'4" wing may have gained even more fans when he stepped to the mic and spoke like a pro in the post-game interview.

Chris Doherty, Marlborough (MA) '18 – 6'6" post beast had an up and down sophomore campaign but was way up when he was on the court, including 16 points and 15 rebounds against Concord-Carlisle and Mass Gatorade Player of the Year Eric Sellew.

Taelon Martin, Putnam Tech (MA) '19  – Much like Malone before him, Martin played a key role for a championship-level team, was given more responsibility as the season wore on and gained invaluable experience while producing at a high level.

Dyondre Dominguez, Tolmon (RI) '19  – Didn't waste any time announcing himself to the high school scene, putting together a handful of 30-point nights at the beginning of the year. Reminds me of a young Tyrn Flowers (minus the mean mug)

Quest Harris, Lowell (MA) '19 – Super southpaw has vision, nice range on his jumper, can get to the rack, emerging explosive athletic ability, and -most importantly as a point guard- confidence to lead that will only get better with age. Filled it up with 13.5 points, 4 rebounds, 3 assist and almost 3 steals a night in a tough conference.

Tanahj Pettway, Central Catholic (MA) '18 – Became the unquestioned leader of his team as a sophomore and was one of three underclassmen to be named to the Merrimack Valley All-Conference team, along with Harris.

Jay Dieterle, Franklin (MA) '19 – Opened his prep career with 24 points in an upset over Catholic Memorial and only gained confidence from then on out.

Tommy ONeil, St. John's Prep (MA) '18 – The 6'8" big man will look to keep adding dimensions to his game over the summer after a successful sophomore season.

Raheem Solomon, Sacred Heart (CT) '18 - Much like Fisher, Solomon could've been a 20-point a night guy elsewhere but was tremendously valuable in key spots all season to the Hearts

Cairo McCrory, Northwest Catholic (CT) '19 – 6'3" frosh plays even bigger, using his wingspan to wreak havoc on the boards. Seized the opportunity to be John Mirabello's go-to guy throughout the season.

Akok Akok, Manchester West (NH) '18  – 6'5" sophomore put together a breakout season, averaging close to a double-double, and sealed it with a buzzer-beater to send his team to the D2 Final Four in mid-March.

Brycen Goodine, Bishop Stang (MA) '18 – Averaged over 20 points a night for the Mass D3 State Champions, who will return the core of an already-successful squad next season.

Nyzair Rountree, Holy Cross (CT) '18 – Led the Crusaders to a tourney run after giving Sacred Heart their closest in-state game in years. Great in transition with a developing jumper, '16-'17 could be a big time breakout season for Rountree on multiple levels.

Ghared Boyce, Everett (MA) '18 – Armed with range on his unorthodox but consistent release, Boyce was a scoring machine for Everett this season and enjoyed a ton of personal success along the