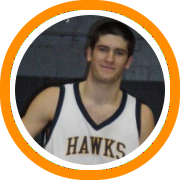 North Georgia is in NCAA Division II school that plays in the Peach Belt Conference. Last year, the Saints finished with a record of 10-16 including a 7-10 mark in conference.

Varrichione is a strong, superior athlete who is a prolific shot blocker on the defensive end and an animal on both sets of glass. He averaged seven blocks per game during his senior season, utilizing a long wing span and 36 inch vertical along with his great timing and discipline.

He is likely to make his most immediate contribution on the defensive end next year for North Georgia State.  Offensively, he has shown consistent improvement over the course of his career, developing his game both with his back to the basket as well as facing up.

“No one works harder than V”, said Xaverian Brothers head coach Dan Salazar. “He is the player coaches dream about. There are no days off, but on top of that he is extremely coachable.”

Varrichione visited North Georgia State earlier this month and had a workout with the team, which is allowed by NCAA rules only at the division II level.

“When he went on his visit, he told me he outworked everyone. He literally earned his offer in the gym,” Salazar said.  “We are so proud of Michael, and the fast and aggressive pace that North Georgia plays make it a perfect fit for him.”