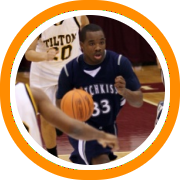 We caught up with Hotchkiss head coach Fred Benjamin late last week and he said his phone was consistently ringing with news of how well his rising junior guard, Derrick Wilson, performed over the summer.

Benjamin traveled to Philadelphia early in the month of July to watch Wilson shine at the Reebok All-American Camp.  He certainly wasn’t disappointed as the powerful guard played to especially rave reviews that week.  For the rest of the summer Wilson ran with the same New York Gauchos team that included Melsahn Basabe and another Hotchkiss product Jason Morris as they traveled to the Nike Peach Jam, AAU Super Showcase, and AAU Nationals.

On Monday, NBE Basketball reported that Wilson had picked up two new offers following the summer from Florida International and Virginia Tech.  Wilson reportedly already had offers from Georgia Tech, Syracuse, and Rutgers along with strong interest from programs including Ohio State, Stanford, North Carolina, and Washington.

The high major offers don’t come as much of a surprise as Wilson is a consensus top 75 player in the country according to virtually every national scouting service as well New England’s top prospect in 2011 according to both ESPN and Rivals.

Wilson is originally from Alaska but came to New England as a freshman to play both football and basketball at the Hotchkiss School.  He has been the epitome of a two sport star since his arrival but is reportedly only interested in playing basketball at the college level.