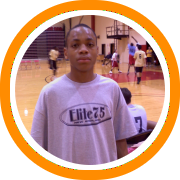 In 2010, a banner year for grassroots hoops in New England started at Junior Elite 75 Showcase II, which was held on the three courts in the legendary Case Gymnasium at Boston University. There was a ton of young talent in the gym on that rainy day in March. Here's a look at some 6th & 7th Graders who left the gym on that day with a buzz.

Bruce Brown - Spiderman is currently a senior at Vermont Academy is ranked #31 in country in the ESPN C/O 2016 Top 100 Rankings. The Miami Hurrican to-be had a legendary summer-circuit career with BABC.

Long-lanky wing made plays all over the floor and showcased immense potential with a freakish combination of length, athleticism, and competitive fire.

Tremont Waters -  Currently a junior at South Kent ranked #34 in the country in the ESPN C/O 2017 Super 60 Rankings. Set to run with Expressions Elite in the EYBL this spring.

Waters is a jet quick young point guard who gets anywhere he wants on the court with the ball and is very active defensive applying ball pressure. What may be most impressive was his ability to take care of the ball while playing at an attacking tempo.

An all-star by at the end of the day, Green defensively never gave his man an inch space sometimes forcing bad passes resulting in turnovers.  Offensively he used his quick burst speed to move well without the ball and find the open spaces on the court or cutting into the paint.

Corey Daugherty - Currently a freshman guard at Brown after a distinguished career Barrington HS and a summer-circuit tenure with the New England Playaz.

Daugherty played strong on the offensive end bringing good energy and was unpredictable when driving the ball.  He established a presence as a long range shooter and displayed abilities to drive with either hand.

KeAndre Fair - Senior guard is part of a dangerous back-court for a Weaver High School squad which is ranked #5 in Connecticut. Plays for CBC on the summer circuit.

Fair is a quick point guard who is very crafty for such a young player.  He has a great attitude and makes good decisions with the ball making plays for himself and his teammates.

Sherron Harris - Athletic C/O 2020 guard has been a big part of the back-court for both Lawrence Academy and BABC over the past few years.

A very quick guard, Harris excelled on the defensive end as a scrappy and fearless defender playing very hard especially in transition and hustling for the ball.  Offensively, he continued to use his quick wheels to his advantage, consistently getting himself into the paint.

Tommy Mobley – Had a storybook scholastic career at Newton North HS and also thrived on the summer-circuit with BABC. Mobley is now a post-grad at Philips Exeter committed to Amherst College.

A 5’10 post player, Mobley was deceptively strong when battling for rebounds and even more strong once he grabbed the ball as opposing players were not able to rip the ball loose.  His mentally to get dirty on the trenches earned him all-star status.

Geoffrey Grey - Former Newton South HS standout is currently at Emerson; where he started a number of games in the back-court for HC Bill Curley.

Gray is a 7th grade floor general with great point guard skills and a nice crossover move off the dribble.  He does a good job of keeping his head up and finding the open man and is always a threat to break down his defender off the bounce.

Tyree Weston - The former New Bedford High School star was probably the top 7th Grader in the building at the 2010 #JE75.

A swingman who is still young but already has good size, strength, and athleticism, Weston has a gear beyond most others with a great first step to get to the hoop where he can absorb contact and finish consistently in traffic.

Jacob Coleman proves the saying that sometimes big things come in small packages.  He is only 4’10 but possesses a deadly pin-point accurate perimeter shot both short and long range, and a fantastic basketball IQ making good decisions when he has the ball.

Ernie Chatman - Class of 2016 guard has made noise at Everett HS and Boston English over the past few years while also suiting up for the Boston Spartans and excelling on the BNBL Circuit.

A well schooled and hard-nosed young player with a bright future, Earnie defended and shot the ball well – consistently squaring up to the rim and making shots off both the catch and the dribble.

Howard is a great young guard that can fly down the court with his amazing speed and finishes very well. He also has a very good outside jump shot if defenders can somehow stop him from driving to the hoop.

A 7th grader, is an athletic small forward who is a playmaker in transition & a solid on the ball defender. He earned all-star status by way of his shooting & ball-handling.