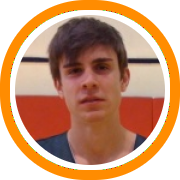 The Warriors faced an initial set-back to start last weekend’s Connecticut Division II AAU State Tournament as they fell in the 8:30a.m. game on Saturday morning.  But lucky for them the tournament was organized in double elimination format.  So when they won their second game of the day on Saturday they earned the right to return on Sunday.

The task was daunting on Sunday as the Warriors faced the challenge of winning 5 games that day in order to take the championship out of the loser’s bracket.  But that’s just what they were able to do as the 1-2 punch as Jason Pranulis and Connor Boyen again led the way, allowing the Warriors to knock off Supreme Bball in the semi’s 72-60 and CT Gold North in the thrilling double overtime final 83-79.

No opposing defender had an answer for Pranulis all weekend as his combination of post moves, reverse lay-ups, and put-backs allowed him to put up big numbers offensively while controlling the defensive glass.  Pranulis finished his weekend with 32 points in the final and averaged over 30 per game on the weekend.

When teams decided to make adjustments to stop Pranulis, that’s when Boyen would take over. His silky stroke from 3 and strong moves to the basket were consistent and incredibly clutch.  That was never more apparent than in the quarter-finals when he scored 10 fourth quarter points including a fall away three-pointer at the buzzer to give his team a single point win over the Connecticut Northstars.  Boyen again stepped up in the finals to score 28 points and averaged over 21 per game on the weekend.

In addition to Pranulis and Boyen, the Warriors got good production from their supporting cast as well:  Jake Belden with his overall floor game and his clutch free throw shooting; Collin Schneider and Mike Andrulis with their spot up shooting; Ivan Kraniy and Shaine Thompson with their defense and quickness; Bryan Charette with his rebounding and shot blocking; Bryan Spickle with his energy and effort; and Aaron Taranovich with his instant offense off the bench.

"I am in awe of these kids.  Playing five games on Sunday starting at 830 a.m. was grueling,” said Warriors head coach Mike Capalbo.  “Every time I thought we had nothing left they dug deeper and found a way to win.”